People who knew me as a Postal letter carrier invariably assumed that I approached Christmas with even more dread than your typical Grinch. They were wrong. I have always anticipated Christmas with a five-year old’s delight.

It is true that the commercialization of Christmas wore on me. I did not jump for joy upon seeing the first Christmas catalog or hearing the first Christmas carol, those occurring as they did, at the obscenely premature run-up to Halloween. The really awful month was November when the weather turned mean and the bulk catalog mailings began to pile up on the work room floor. The worst were election years. We’d be digging out from under the two-week frenzy of campaign mailings just as the Christmas catalogs began to seize ground around our cases.

These were the days when first class mail was our mission and third class mail—what you all call junk mail and we officially called bulk business mail—was filler. Catalogs stacked up beside each carrier’s case in towers that a mere sneeze could topple. (This was also before safety took precedence over delivery of the mail.) Most people never realized that at least a third of a carrier’s day was spent sorting mail. This, of course, has changed with the advent of machine-sorted mail. But from the 1970’s through the 1990’s, carrier’s sorted their own mail into two- or three-sided metal cubicles called letter cases.

I remember marveling as a child that the mailman just happened to have our mail in his hand when he got to our house.What seemed like serendipity was anything 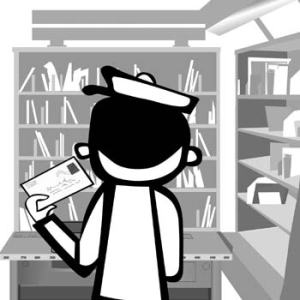 but. Each address on the carrier’s route had a specific site on the letter case. Mail was pre-sorted to individual routes then had to be re-sorted by the carrier into delivery sequence. Casing mail quickly and efficiently was a huge stress factor, particularly for fill-in carriers who jumped from route to route. Routes that served the wealthier neighborhoods were especially inundated with catalogs, sometimes in multiples of two or three of the same issue per house. (Imagine trying to shove a 12-inch-deep stack of catalogs and magazines through a brick-sized mail slot on a million dollar physician’s mansion!)

As sacks upon sacks of catalogs rolled in the back door, pillars grew around the cases of those wealthy-patron routes. No matter how fast a carrier cased mail, physics ultimately limited what could be hauled out the door and delivered each day. The letter cases would bulge till letters and catalogs sprang back out in defiance. The vehicles could only hold a finite volume of material. At the height of the heavy Christmas catalog days, carriers’ casing times expanded toward the lunch hour and when they finally pulled out of the parking lot for their first delivery, the truck fannies drug the ground like low-rider hotrods. The floor disappeared during these periods. New sacks of mail arrived before we’d gotten out the door. Days upon days of curtailed catalogs took on Jack and the Beanstalk proportions.

Something magical happened during the first week of December. The catalog mailings came to an abrupt halt, replaced by increasing volumes of cards and packages. This was the fun part. In addition to the change in volume, staffing was at its peak and extra delivery trucks arrived from the underutilized Forest Service fleet. For the next three weeks, The Postal system worked the way we all wished it would work year round. Work flow was organized, help was available, and managers listened to their employees’ needs. Each holiday season, my first encounter with a Christmas card brought me the same euphoria as the first glittering snowflakes. This was when the Postal Service shined, when our presence was appreciated, when our deliveries were received with glee.

The beauty wore off on December 26th when we walked into a building that, once again, resembled a fortress of mail; bills, tax forms, after-Christmas blow-out sales, and Publisher’s Clearinghouse mailings—nothing anyone wanted.

7 thoughts on “Christmases Past”