How’d it come about? Each year the extended studies division of Boise State University hosts a couple of overseas trips. In the past, my limited time and resources pushed these trips out of reach. Last fall a flyer arrived, announcing BSU’s spring trip to the Galapagos Islands and Machu Picchu. I drooled over that flyer like a Saint Bernard. South America hadn’t been on my bucket list, but I remembered my mother raving about her visit to the Galapagos despite some trying personal circumstances. Another relative sent me a postcard from Machu Picchu a few years ago which spurred my curiosity about that region. The opportunity to visit both locations seemed too good to be true—and it was. The price was double what I figured I could afford. I pinned the flyer above my desk and pondered it every day for two months. Then, in a fit of cleaning and purging, I ripped the flyer down, noted that the sign-up deadline was long gone and decided it was safe to make an inquiry. To my immense surprise, there was still room for me.

So began a flurry of preparations:
• First I dug out my camera and tried to master the catacombs of menus buried under the bristle of buttons and knobs. I agonized over the need for lenses, a tripod, and a way to manage the weight of all these accoutrements.
• Then I tried to fish out the junior high Spanish that I’d always assumed would rise to the occasion should I need it. But during the ensuing years I’d tried too hard to cram German into my Swiss cheese brain and I discovered that the weight of the German language was far greater than the squishy Spanish that dissolved into German mid-sentence.
• And there was the issue of my God-awful ignorance. I had to consult an atlas to figure out on which side of the continent the Galapagos Islands are located! Running my finger down the long tracks of the Andes I found Cusco, Peru, a day’s travel from Ecuador. I staggered home from the library under a stack of books about Darwin, indigenous American peoples, Inca Civilization, and Spanish conquest. 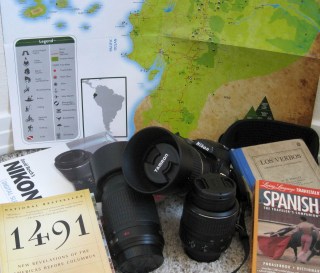 Before I knew it, time was up; ski season was over, the trees had leafed out, the grass had greened, and it was time for me to pack for extreme heat and extreme cold in an extremely compact and light bag.