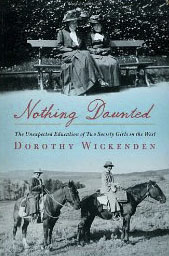 Nothing Daunted; the Unexpected Education of Two Society Girls in The West
by Dorothy Wickenden (Scribner-2011)

This book, written by the granddaughter of one of the two society girls, recounts the experiences of two young college-educated Easterners during their one and only season as rural school teachers in an isolated mining and ranching community in northern Colorado.

The circumstances of the story are as unlikely as they are recognizable. In the first years of the 20th Century, it was rare for women to graduate from college. More rare, was for two women to develop a sister/friend bond with as much glue as what Dorothy Woodruff and Rosamond Underwood enjoyed. Following their graduation, both women traveled together for an extended stay in Europe. Returning to the states and approaching their 30’s, both women uncharacteristically remained unmarried, fancy-free, and footloose.

Providing adequate education to the children of settlers in the tiny, far-flung communities in the west was an ever-present dilemma in the early 1900’s. Through a haphazard string of connections, the settlement of Elkhead, Colorado, scored an unforeseen bonanza with the hiring of the two eastern friends to teach in their newly constructed school. It is unlikely that either woman would have had the courage to leave the comforts of home for the vast unknown wilderness without each other’s moral support. But together, they were a formidable force with unwavering principles and devotion to their young charges.

I was drawn to this book for its setting in an area near where I grew up. Additionally, the story of two headstrong young women, bucking traditional expectations, piqued my interest. Wickenden did meticulous research to flesh out the letters and old documents that she already had from her grandmother. The book is well written and scrupulously cited. My only complaint is based upon my own expectations about the subject matter. Nearly half the book details the women’s early friendship, education, and world travel. For example, there are lengthy descriptions of ancillary characters in France who then play no role in the balance of the book. While true history buffs may enjoy the first half of the book, I would have been satisfied with half the amount of background  information. Recognizing my impatience is important to me as a writer because it demonstrates that ubiquitous conundrum of what to put in and what to leave out.

Once the girls finally reach Hayden, Colorado, the narrative takes off. The two remarkable women adapt with amazing grace to the rigors of riding western saddle ponies through three-wire snow accumulations, waking to find their quilt covered with three inches of fresh powder, and accommodating a one room schoolhouse to the needs of twelve learning levels. The community itself exhibits western grace in its acceptance and nurturing of the greenhorns.

I appreciated the Epilogue, which describes the teachers’ lives after their memorable year in Colorado and summarizes what happened to the Elkhead community after they left. As one of their students remarked in 1974, “I don’t believe there ever was a community that was affected more by two people than we were by those two girls.” Likewise, that year spent in Colorado was a pivotal moment in time for the teachers—a time when they both learned how to “take life by the throat and deal with” whatever came their way.

9 thoughts on “Nothing Daunted”