My part of the world was civilized (that is whitified) between the 1840s and the late 1860s. Boise—named earlier by the French fur trappers who stumbled upon this fertile valley, bisected by a tree-lined river—was a refreshing stop along the way for once dreamy-eyed white settlers hell-bent for the promised land of Oregon and for equally dreamy-eyed would-be silver and gold miners determined to find their winning stakes in the implacable mountain ranges of the west. Of course, by the time they reached Boise, the dreams in their eyes had been clouded by buckets of dust, pain, hunger, sorrow, and disappointment. And here, one more raging river impeded progress.

Just imagine swimming your covered wagon across this river!

Some crossed the river at Three Island or Two Island Crossing north of Boise, which at that time was more fort than town. For those who skipped the northern crossing, a hundred or so miles downstream was one more chance to cross. In 1863 this site became the stage crossing for traffic between San Francisco and Boise. The difficult crossing was enhanced by a ferry service. Today, of course, we swoop across the river on a sturdy steel bridge, barely registering the geographical nightmare that confronted our predecessors. 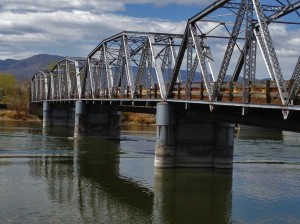 I’ve crossed the bridge at Walters Ferry many times on my eager way to or from some desert adventure. Curious about the jumble of buildings just south of the bridge, this time I stopped for a gander. 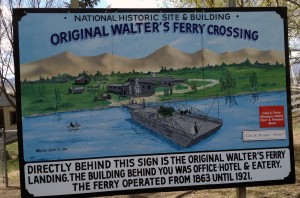 Billed as Cleo’s Ferry Museum, I expected the usual display of pioneer gear plus explanations about the evolution of the crossing, from swimming behind hopeful hooves to the construction of the bridge in 1921. What I found was the most astonishing collection of kitsch and platitudes I’ve ever seen in one place.

The Gatekeepers, both immortal and earthly. 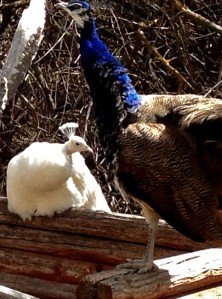 There must be a thousand birdhouses and signs to guide visitors along the half-mile paved pathway which passes a tiny sanctuary perched on a hill with a view of the river and the fields and mountains beyond. The entire site is flanked by three tremendous white crosses and an equally huge rainbow on the hill behind the property. (I thought maybe the rainbow was a sign of inclusiveness, but maybe not . . . ) 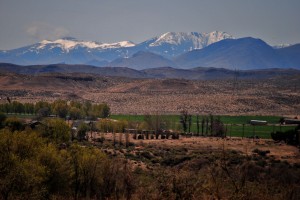 Mixed in with the over the top kitsch are entire tableaux of really beautifully executed bronze sculptures.

Yes, this is Noah’s ark, beside a corral of concrete African wild game. (See the giraffe surveying the surroundings?

I learned from further research that the “museum” was established by Dr. S.A. Swayne’s wife, Cleo. There is a cluster of old locked buildings, one of which appears to hold a collection of old-time medical instruments, probably once tools of her husband’s trade. I guess Mrs. Swayne had a lot of time and money on her hands. Cleo began her project in 1978 an kept at it for thirty years until her death at the age of 95. 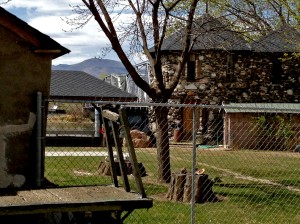 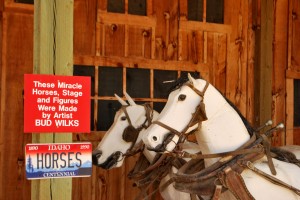 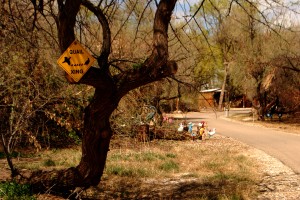 Lest you missed them, there are quail, deer, mice, bunnies, and other assorted wildlife present.

Despite the busyness, Cleo created a quiet, contemplative garden here in the high desert back country of southern Idaho. Rounding each bend in the path, I shook my head in wonder at the overpopulation of gnomes, fairies, gazing balls, license plates, birdhouses, and sundry other anachronisms. But I was smiling the whole time I was there. 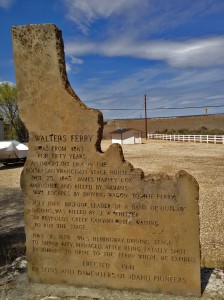 “Walters Ferry was from 1863 for fifty years an important link in the Boise-San  Francisco Stage route.
Oct. 25, 1865  James Harvey Cox ambushed and killed by Indians. Wife escapes by driving wagon to the Ferry.
July 1868  Bigfoot, leader of a band of outlaw Indians, was killed by J. W. Wheeler in Reynolds Creek Canyon while waiting to rob the stage.
July 31, 1878  Wm. S. Hemingway, Driving stage to Silver City, managed, after being fatally shot by Indians, to drive to the ferry where he expired.
Erected 1941
By Sons and Daughters of Idaho Pioneers.”

32 thoughts on “Walter’s Ferry; aka Idaho’s own private Kitschworld”