I’ve hiked a lot of trails. I’ve logged miles beyond measure. I am a fanatic about appropriate foot wear. I made a nice living from my feet. I worship my feet. So how could I be so foolish?

A last peek at the Pacific and Three Arches Rocks

As I mentioned in the last post, I enjoyed a relaxing stay at the beach with my friends. I got up early Sunday morning for the long drive home. More fires burned between the ocean and my destination. The return trip would take the direct route: freeway all the way. Well, almost.

I just had to take the Historic Columbia River Highway from Troutdale to the Dalles. This landmark road was built between 1913 and 1922. It parallels Interstate 84, providing breathtaking views of the Columbia River to the north and magnificent waterfalls tumbling through dense foliage from the plateau above the south side. In places, the road tunnels right through the hillside. I love this road. 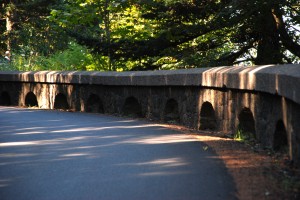 Stonework typical of the old road.

View of the Columbia River from the old highway. 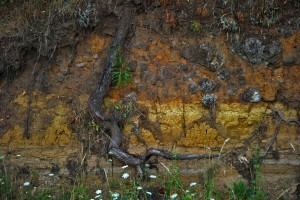 Road cut into the mountain 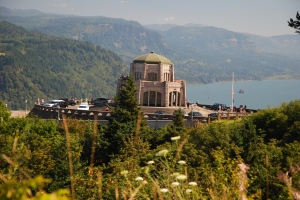 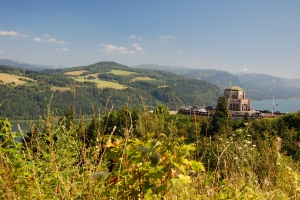 I arrived at Latourelle Falls ahead of the madding crowd. I’d never stopped at this falls before. It was time for a potty break and a picture. I bounced out of the car with camera in hand. The sun god was with me. I hyper-ventilated with euphoria as I gazed at the lower falls.

I tried to ignore the footpath the led into the woods beside the viewing area. But it beckoned, like a magician promising tricks. What lay beyond? More views? More . . . I’ll just go peek around the corner.

Not with these shoes, you idiot! Go back and get your hiking boots.

One curve led to the next, and then another little hill, and . . . When I start down a trail, I’m as helpless as a sight-hound chasing a computerized bunny on a rail. I kept going. It was a beautiful trail through an enchanted forest, unlike anything I’d find around home. 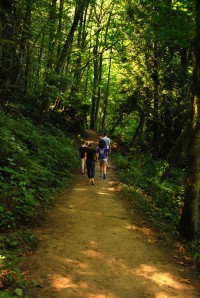 After a mile or so of scrunching my toes to keep the stupid shoes on my feet, I heard a gentle roar. Another falls! 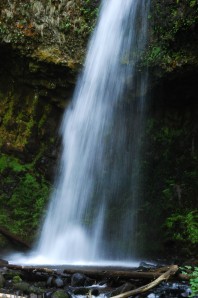 The light on the upper falls was muted, mystical, gorgeous. But I noticed one thing: Not a soul was coming down the trail. Instead, people continued on past the second falls, crossing the river and going . . . where? I hurried to catch up. Inquiring minds need to know. “Does this trail circle back to the parking lot?”

“Yeah, I think so,” responded one girl in a group of teenies wearing shorts and proper shoes. So, I marched another half mile, the trail taking me up and up and away from the parking lot. About this time, it dawned on me that, in addition to my improper foot gear, I had not a stitch of ID on me, no water, and I had left everything I own in plain sight in my car in that very public parking lot! My mind began spinning a crime scene, with my car the center attraction. I reversed direction. Maybe I didn’t know where I was going, bu at least I knew where I had been.

Throughout this little stroll, the reality of the long road trip ahead kept me trotting and speed-walking, despite my heels slipping off the flimsy rubber soles. Now I began jogging, nay, galloping downhill in my flip-floppy shoes, on a narrow path of dirt and rock. The incessant warnings of an old friend, “Don’t RUN!”  rattled through my head between visions of a ransacked car baking in the parking lot. Those warnings had only made me more bull headed . . .

“Don’t RUN!” My brain said, while my feet ran. And then it happened. After turning my ankle countless times, I lost my footing and hurtled toward the dirt path with a sheer drop off on my left. Camera in left had, my right hand reached out to cushion my fall. I looked down to see a jagged hunk of granite peeking up between my pinky and my ring finger. “Hah! Gotcha!” it gloated.

The only thing in my pocket besides the car keys was a used Kleenex which I slapped between my fingers as I continued to jog down the last half mile to my car, which was blessedly unscathed. I did what I could to rinse and doctor my wound with a clumsy left hand and headed for Boise with my right hand waving like a rodeo queen as I wove between semis and travel trailers for nine hours.

The next day I marched on swollen ankles and cracked heels to the doc-in-the-box two blocks from my house to get my wound officially cleaned. Six stitches and two weeks later, I’m just about ready for the next lame-headed adventure. The feet, though filthy beyond black, survived just fine. 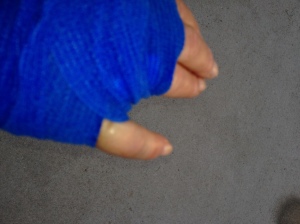 Don’t run down a dirt path in flip-floppy shoes!