It was a most auspicious day, beginning with the fact that it did not rain during the night. Day two on the Magruder Corridor; I was traveling with friends, the Thomases—not just for company but also for safety. We nicknamed it the Magruder Trail because parts of it are merely a glorified goat trail. Technically, this road is a 600-foot wide corridor between two major wilderness areas in Idaho—the famous Frank Church and the Selway Bitterroot. Were it not for this break between wilderness areas, we would not be here enjoying the spectacular vistas. A necklace draped across the shoulder of the state, the primitive road follows parts of an old Nez Perce Indian trail from the Montana-Idaho border near Darby to just shy of where the Snake River marks the border between Idaho and Oregon. Though the journey is only a little over 100 miles, we set aside four days to explore the magnificent countryside and to soak up the sublime solitude of cleaving mountain ranges with names evocative of their history and geography: The Bitterroots, Indian Range, Moose Range, The Crags, Clearwater Mountains and the Salmon River Mountains. The Magruder lies just south of its more well-known cousin, the Lolo Trail, another Nez Perce path made famous by Lewis & Clark.

The day before, just after we put our tents up at the Magruder Crossing campsite beside the upper Selway River, it rained and soaked everything. We observed happy hour huddled in the car while the sky squeezed itself dry. The rain petered out just as we drained the last drop of wine and emerged to prepare our evening meal. The night sky was a black hole freckled by insistent bright stars till it clouded over once again in the wee hours of the morning. We managed to eat breakfast, break camp, and load the cars before the sky wept again. The wipers waved furiously as we pulled out of the campsite. We crossed the river on an historic truss bridge erected by the CCC and began a journey into the foggy sky. A horrendous wind storm had knocked trees over like matchsticks the day before. Our luck was such that a grader was clearing the road just as we reached the site of this little micro burst. We popped out of the clouds temporarily at Kim Creek Saddle and got out to admire a shy view of the surrounding mountains, cloaked here and there with dense fog in some places and wispy tendrils of moisture in other places. 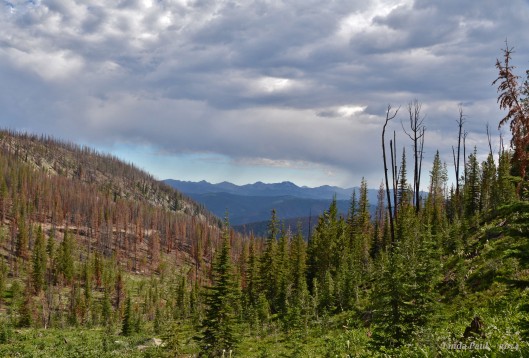 Two and half miles later, it was drizzling again. We stopped to ponder a road sign marking the death of Lloyd Magruder, for whom the road is named. Magruder’s murder is a classic old west tale of gold and greed and grand anarchy. Magruder was a Lewiston merchant during the 1860s gold rush years. He was a respected family man with a promising political future in the young Idaho Territory. He had packed supplies across these rugged mountains to the most recent hotbed of gold mining in Bannack, located in what is now western Montana. He was on his way home with a pack string empty of everything but the gold earned in payment for his merchandise when he and his companion were murdered under cover of darkness by robbers who then burned the evidence. The site of the crime is seven rugged miles north of the sign where we paused to take in the miles of unending forest. For more about Magruder, I recommend This Bloody Deed; The Magruder Incident, by Ladd Hamilton.

Two more miles up and we reached Observation Peak at elevation 7,585 feet. All we observed was the sign telling us where we were. The fog here was menacing. But the bear grass was positively enchanting.

Fifteen or so minutes later we pulled up at the trailhead to Salmon Mountain Lookout, a hike which the ranger at Hell’s Half Acre had highly recommended. What we saw through the fog beyond the sign looked as daunting as the stairway to the Empire State building. The temperature was 39〫Farenheit. Figuring it not worth a mile and a half hike in the cold and damp for another nonexistent view, we crawled back into our cars and were about to continue down the road when, like a stage curtain, the fog lifted above our heads and revealed fathomless blue above. Bruce turned off the ignition, got out of his car and walked back to my car with a quizzical expression.

As we stammered, the clouds continued to recede. We really had wanted to see that lookout. By the time our day packs were organized and our boots laced, the clouds had kindly disappeared. We enjoyed clear blue skies for the rest of the day. Five Days describes what we found at the top of the mountain.

From this point on, the road got gnarly. Earlier, some people in fancy trucks bragged that they’d popped three tires on this stretch. Of course, we surmised they had also stayed at the lovely Magruder Crossing campsite which we found disturbingly trashed, so the validity of their report lacked oomph. However, the thought of driving 50 miles on a doughnut tire nagged. We creeped and crawled up and down a series of long grades. We passed Horse Heaven Saddle without ever seeing the cabin that is located just off the road. Our eyes were glued to the rocks and ruts just in front of our respective cars. Likewise, we passed over Sabe Saddle barely recognizing what it was. At Dry Saddle, elevation 7,863, we sighed with relief; the worst of the road was behind us. Then a couple of young men in a big red pickup with tires as tall as me passed us. Quite loquacious, they were, saying they were headed to Poet Creek campground for the night. We questioned our generosity in letting them pass us and wondered if we’d get shut out of the campground with a mere four campsites. Alternative campsites are scarce on this side of the grade. Imagine our surprise a few hours later when we pulled into a completely empty Poet campground. Who knows where the red pickup went?

Coughing dust, I tried to document the road, but it was impossible. 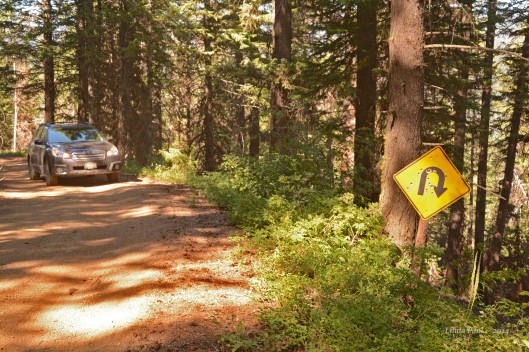 Don’t be fooled. It was not a U-turn but a V-turn.

We loved this campsite so much that we stayed for two days, exploring another lookout and enjoying the burbling of Bargamin Creek as it tumbles down to the Salmon River to the south. I slept sans rain fly so that I could enjoy the Milky Way in its full glory from the heart of Idaho’s remote back country.

Greeting civilization; I was so tired & rummy that, for the life of me, I couldn’t figure out the self-timer.

35 thoughts on “Traveling a thin line between wilderness areas”