Last week I forcibly ripped myself away from the computer screen, behind which I’ve spent way too much of the last month. The day I picked for my grand escape was not the most delicious day of the week by a long shot. Rain and snow flirted with damp air currents, keeping the less intrepid indoors. It was a perfect day to visit my own private zoo.

This little monkey played hide and seek with me, as he munched a cricket. He’s a young Patas Monkey. 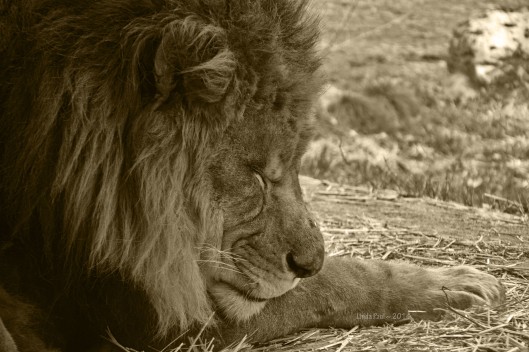 This guy’s mighty roaring drew me toward the lions. But I dilly-dallied long enough that it was already nap time by the time I got over there. His girls were huddled nearby.

Hmm, that corner looks a little bare. A nice little gazelle statue might brighten it up. 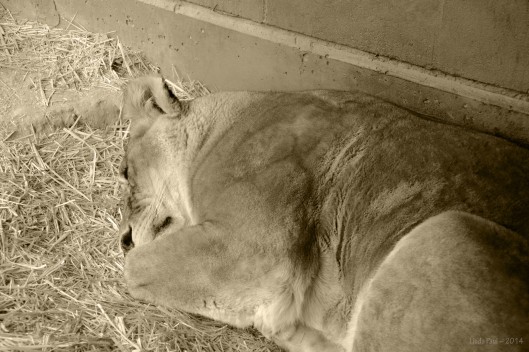 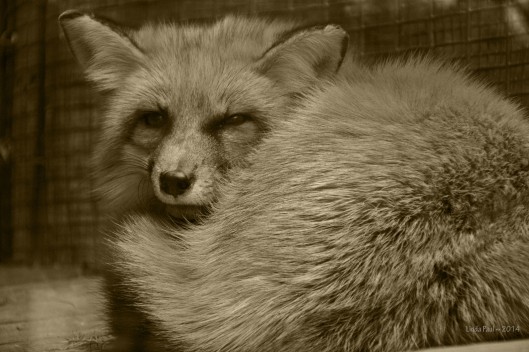 Meanwhile, this little red fox was not thrilled about the voyeur interrupting his nap.

I was just in time to feed Jabari a treat of lettuce leaves which his sensuous black tongue gently lifted from my hand. Usually there’s a hoard of half-pints screaming for a chance. 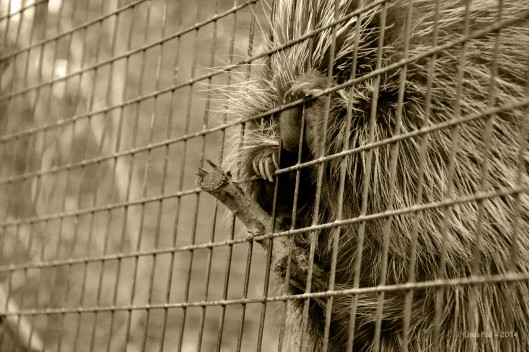 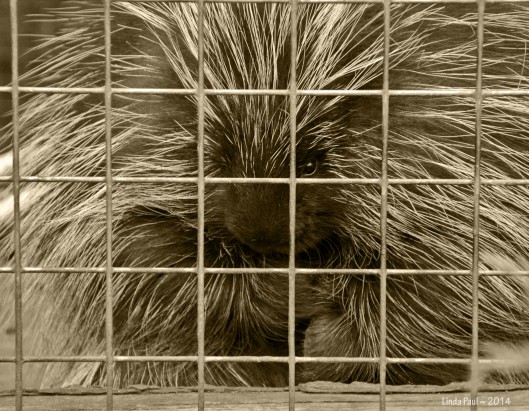 Oh, a porky with a Don King doo.

And a long-maned wolf keeping an eye on me.

I approach zoos with conflicted emotions. Part of me cries for animals kept in small enclosures, far from their natural habitat, and hounded day after day by the probing eyes and loud intrusions of two-leggeds, both large and small. Zoo Boise juggles the all too common dilemma of limited urban space. I discovered, however, that things aren’t much better even in a world-class operation like the San Diego Zoo. So how do animal lovers who work in these environments and who patronize them justify the impounding of wild animals for the gratification of human observers?

Like so many dilemmas of conscience, this one is complicated. The Earth is in the midst of the sixth mass extinction of species in half a billion years. The hows and whys of this phenomenon are many and complex, but the speed at which it is happening is frightening. Our own species would do well to herald these extinctions as our own canaries in life as we know it. Mass extinction is inexorably linked to climate change. And human involvement in the speed of that phenomenon links us directly to the animals we are losing.

While not all zoos are operated for protection of animal-kind, many have stepped to the forefront in global conservation movements. Zoo Boise, along with many other zoos around the world, participates in animal breeding and research and contributes funds for animal conservation. Zoo Boise collects an extra .50 from each admission ticket and $5 from membership fees to fund proposals around the world that address issues such as:

Many of the animals on display at Zoo Boise, and other zoos around the country, are animals who have met with disaster in their native habitat. An eagle with an eye shot out, a monkey with a maimed arm, a lion with a heart murmur, or a young giraffe born in a zoo and never taught the survival techniques necessary to live in the wild. These animals live on, despite their disabilities. They are beloved and cared for and their presence helps the public learn more about the plight of their species and to develop the caring connections needed to sustain support for species conservation.

It still hurts to watch a beautiful Amur Tiger pacing his one-block enclosure. But it could be argued that the meter reader who paces cholorous city streets day after dreary day, bled of energy to break out of his web of employment, lives no better life than the pacing tiger. We are all thrown into circumstances over which we have little to no control. Perspective is survival.