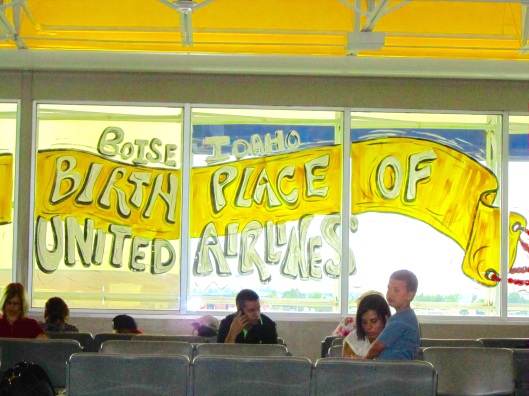 Boise’s simple, but functional airport is a nice way to begin.

I left my house at 1:30 pm on Saturday. I landed in Munich at 1:10 pm on Sunday. I never sleep on airplanes, especially not on the first leg of a journey. Jetliners lack the rhythmic clacking and/or rocking of car, bus, or train travel, all of which put me to sleep despite my best efforts to see the sights.

Cousin Dirk was eagerly awaiting my arrival. Somehow I had miscommunicated with him so this was his second trip to pick me up. Less than an hour’s drive later we pulled into the driveway of Dirk and Delia’s new home on the outskirts of a small, but booming bedroom community north of Munich.

The back yard, where we ate most meals

Beyond Delia’s vegetable garden is the rooftop garden over the garage with continually blooming ground covers.

A quick change of clothes and off we went on bikes. In anticipation of my visit, Dirk had diligently lubed and maintained the bike of his six-foot+ son. He dropped the seat as low as it would go. As long as I kept moving, all was well, but I prayed for no quick stops. I had to stand on tippy toes to avoid the cross-bar, lurking like a bad dream.

We pedaled about 16 round trip miles on small local roads and bike paths, through villages, to a lovely lake, where we swam for about an hour. There are many such lakes in the area, often created from reclaimed gravel pits. In Germany, property owners may not prevent the public from accessing and using lakes and forests, unless the lake is part of a drinking water system. It seems ironic that in America, the land of the free, we bitterly argue over land use and must fight to keep federal lands open to the public.

We biked through stretches of dark, dense forest, scored by melodious and sometimes raucous birdsong, all of which offset the 95º weather. Back at the house we had just enough time to enjoy some delicious cakes from the local pastry shop, another quick change of clothes and then off to Dirk and Delia’s weekly dancing lesson.

By now it was around 7 pm. Although sitting on the sidelines and watching eight couples from the ages of 30 to 70 perfecting their ballroom dancing maneuvers was interesting, my eyelids were getting mighty heavy.

View from my bedroom window.

After the lesson, we returned to the house for a home cooked meal and conversation till 11:30, when finally the travel, the exercise, and the wine seized me and I stumbled off to bed. This was the first of five busy days with my dear cousin and his wife.

13 thoughts on “Hit the ground running”