Dirk with his mother

My cousin Dirk is goal oriented. I love him. He is a superb skier. Each time I’ve skied with him, I’ve tried harder to perfect my technique, to wrangle my chubby body into peak fitness, all so that I might keep up with dear Cousin Dirk. But it is not possible. Try as I may, I always hit the wall, leaving his German ass triumphant once again.

During our Hochplatte hike, Dirk was disappointed: first, because we weren’t tackling Germany’s highest peak, Zugspitze—because Dirk’s silly American cousin had arrived a day late and brought only ankle-high, breathable hiking shoes rather than good, sturdy, leather hiking boots that could endure three-foot snow drifts (in addition to wedding shoes, Paris sightseeing shoes, and riding boots); secondly, because when we arrived at the pass on the Ammerwald, both his wife and I nixed the risky, steep, rocky scramble that lead to the ultimate high point, Hochblasse.

On my last day with Dirk and Delia, Dirk had an agenda. Of course Delia—being the woman and thinking ahead to a six-hour road trip, a wedding, baggage logistics, college-aged child logistics, and a visit with her own family—also had an agenda. She and I discussed her agenda, which sounded lovely to my tired ass. A short (IE: 3 – 4 hour bike ride), then back home to wash clothes, dishes, straighten the house, pack, and enjoy a final BBQ.

But neither of us is assertive enough to stand down a goal-oriented German man. (“Ja, but what would we do for the rest of the day?” Dirk grumbled as he got the bikes out of the garage.) I can’t say that I’m disappointed that we biked all the way to the Donau (Danube), or that we returned to swim at the lovely lake that launched my visit to Germany. But I will admit that my resistance was wearing thin. What was supposed to be a leisurely bike ride turned into a 31-mile, round-trip, test of endurance in 86〫  humidity. When our journey began at 11 am, it was already hot. The ride—accompanied by bird chatter—took us through a quiltscape of hamlets; farms; corn, turnip, and wheat fields; all seamed together by tidy tree breaks. By the time we reached the village of Vohburg on the banks of the Donau, my ass felt like ground meat.

Delia was smart enough to park her bike and wait for Dirk and me to complete the journey to the banks of the Donau, which was only a few blocks further.

Dipping my little foot into the Donau

But then, Dirk wanted me to see Castle Vohburg. With my limited grasp of German, I willingly followed. “Just up a little hill,” I thought he said. I began grinding gears and punching the crank down with every ounce of my nearly spent energy. We arrived at the top of a 60° incline and went through the gate, which opened onto the Church of St. Peter, which was preparing for an epic music festival. The view was great. 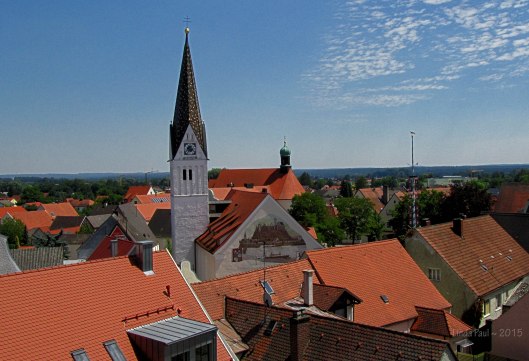 Even better, was joining Delia back in the town plaza for the best Eiscafe I had on this trip, followed by the long return trip home with a route deviation to our lake, by which time I really thought I might drown from exhaustion. But I did not drown. I got sufficiently cooled off to manage the remaining six miles back to the house, where we arrived around 6 PM, just in time to throw dinner on the grill and cram damp clothes into our luggage.

Dirk, I love you, but you damned near killed me once again!