Continued from: Part I; I am the Queen of England! (1)

Yry was born into a world of Hadean national conflict. Her parents’ union linked two discordant countries and breached the mores of the era. Herman Paul met Lenore Dillon by chance. They were each strolling with their respective dogs in the town of Manchester, England, one evening.

Norah was from a well-to-do Catholic family. She had been a naïve and sheltered young woman—”well bred” by the standards of the day. At 17 she had married a “good Catholic man.” It was probably a fashionably arranged marriage. The union was bewildering, unsatisfying, and childless. She struggled for ten years to make the best of it, then discovered that her husband had syphilis. That outrage, she felt, released her obligation to an insensitive boor. Her parents understood her desertion, and took her in, but they could do little more for her. She was a Catholic and Catholic marriages are forever. 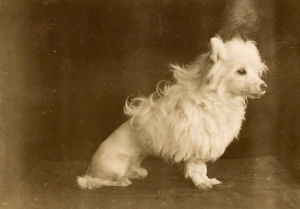 One of Nora’s few pleasures was going for walks with Jack, her high-stepping terrier, coiffed with a silky white mane and a trim little derriere. I imagine my grandfather’s gaze; captivated by the smart little dog trotting towards him, Herman’s eyes follow the leash upward coming to rest on an attractive, fair-skinned young woman with auburn hair piled in ornate swirls. At five-eight, Herman stands only two inches taller than Norah. His intense blue eyes lock onto her gray eyes with interest. Meanwhile, Jack investigates every inch of Herman’s Fox Terrier. How refreshing it must have been for Norah to strike up a conversation with this polite, handsome, dark-haired gentleman with an alluring accent. Perhaps they each inwardly noted their location and time of day and “magically” bumped into one another again—and again.

Frederick Herman Paul was a German merchant living and working in England along with his brother, Willy, a banker. Herman was a thoughtful man, interested in art, literature, and philosophy. Occasionally he took a turn on stage in an amateur theatre group. Herman and Nora’s visits expanded in frequency and duration. Light bantering morphed into serious, soul-searching explorations. Affection blossomed into love. Officially, marriage was out of the question, but filled with vigor and optimism, they flouted the rules and Nora moved into the house that Herman shared with his brother.

Their union produced one child. Yramiris was named, she always claimed, after an Egyptian mummy that her father had imported to England for his import-export business. And it is here, at the very beginning of her story that the riddles begin. Upon closer investigation, her given name was Hertha Iramiris Dillon Paul. Hertha, a name my mother detested and refused to acknowledge, is a Germanic name for the goddess of fertility—no wonder her aversion to it— but also implying strength or vigor. The English boy’s name, Irim means bright; its feminized version is Iram. The name Iris implies rainbow or colorful. So it is quite possible that her parents were merely mixing her Germanic-British lineage and imbuing their little girl with strength and a bright, colorful life—in which case, they succeeded beyond their wildest imaginings.