Alps, Arosa Switzerland, health, My Life with an Enigma, WWI

continued from The Soldier (continued)

The best place for western Europeans to recover from the ravages of WWI was the untrammeled countryside of Switzerland. Crisp, clean, high altitudes were thought to be especially good for tubercular patients. Neutrality during the war had saved Switzerland from the toxic blastings that decimated farm country in other parts of Europe. The comparative abundance of fresh dairy products lured wealthy Germans, French and Austrians seeking to restore vigor and calm nerves. Arosa had served as a leading health resort or sanitarium since the 1880’s.

On the heels of the most frightening event in her life, my mother’s things were suddenly packed and she was sent to Arosa. There was no explanation for her banishment. Not until she was much older did she understand the ramifications of anemia. Instead, this seemed like a steroidal version of standing in the corner. She had been a bad girl. She had let her father down and he was disappointed in her.

At the age of ten Yry was completely alone in yet another foreign environment. Later, I would find a stash of letters that she wrote to her parents and also to her Granny in Darmstadt. They reveal a devoted and very lonely child. She wrote faithfully to each parent at least once a month in a labored childhood scrawl on lined baby-blue note paper. Most letters were written in English, but some were written in German. Frequently she asked about her “Birdie” and her “Pussy,” as well as about maid, Marie, and her friend, Elise. She begged for pictures of her pets or postcards from home. Her letters were signed “Girlie” or occasionally, her given, but detested, name of Hertha. 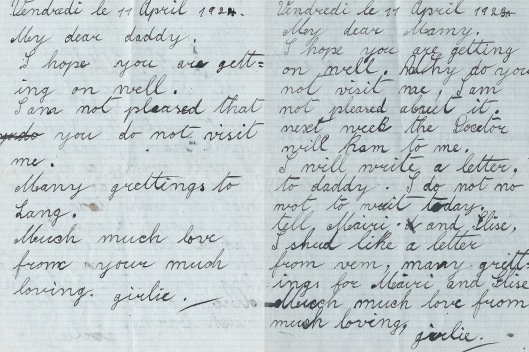 One side of the page is for daddy; the other side is for Mamy.

Vendredi le 11 April 1924; My dear daddy. I hope you are gett-ing on well. I am not pleased that you do not visit me. Many grettings to Lang. Much much love from your much loving. girlie/ Vendredi le 11 April 1924; My dear Mamy. I hope you are getting on well. Why do you not visit me, I am not pleased about it. next week the Doctor will come to me. I will write a letter, to daddy. I do not no wot to write today. tell Mairi and Ilise, I should like a letter from vem, many grittings for mairi and Ilise. Much much love from much loving, girlie./

Her father’s letters to her were preachy warnings and advice to work and study harder. Piled on top of an infancy shrouded by the hell of war, the shock of straddling two languages at the age of six, a violent attack on her body, followed by banishment to the sanitarium, I begin to understand how the stage was set for my mother’s high strung personality. Grandfather Herman’s correspondence sounds cold and callous; a perception supported by a three by four-foot oil portrait that dominated my childhood home, and from which my grandfather’s stern gaze eerily followed me around the room. But I never knew the man so it is not my place to judge his character. He, too, was a product of his environment; German men were raised to be authoritarian disciplinarians. 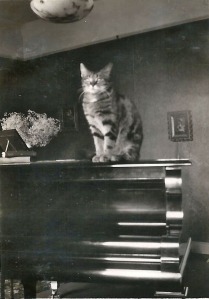 Meanwhile, back in Mainz Pussy on the piano waits for her mistress. (That piano, now in my living room, still attracts kitties.)

10 thoughts on “Banishment to Switzerland”