Arosa Switzerland, childhood, languages, My Life with an Enigma, post-WWI

Language played an interesting role in Yry’s life. In Europe it is common to have a working command of at least two or three languages because countries are geographically close. Borders and cultures have been jostled and mingled by war. Herman, a self-taught linguist, placed great emphasis on languages. He spent freely for tutors to assist Yry with her language skills. Even in Arosa, he paid extra for a tutor to perfect her German. She worked hard, but letters from her father always contained at least one exhortation to study harder. He often inquired about her French lessons. She usually ignored those questions. Language provided interesting puzzles. The nuns frequently commanded the resident dog to “Lechte!” Well, in German this word means “Lick me!” Yry wondered why these crazy ladies wanted the dog to lick them. Eventually she discovered that in Swiss, Lechte means “Sit down!” Now that made more sense.

Dressed in her black habit, the school’s piano teacher resembled a mortician rather than a musician. Piano would not become one of Yry’s best talents. It was difficult to corral her thoughts from the sounds of nature just outside the door. She enjoyed singing in the choir more than practicing the piano.

Every child was expected to eat each nutritious morsel on his or her plate. This was challenging at times. Yry’s first experience with the rare treat of fresh pineapple left an indelible impression. The fruit’s benign color and interesting appearance in the bowl masked a strong, pungent sweetness and stringy texture. She wrapped her lips around a nice big juicy piece and nearly gagged. Puddings were served nearly every day and garnished with a generous splash of cinnamon, which she hated.  But she stuffed them down to avoid the wrath of the nuns. She felt sorry for one of her classmates who was shunned by most of the other kids. Practically every meal involved rice. This boy simply hated rice but the nuns insisted he eat it. The result was always the same; the rice came back up quicker than it had gone down. The nuns accused him of upchucking on purpose and their wrath increased with each incident. But as she struggled to gag down her pudding, Yry sympathized with his plight. 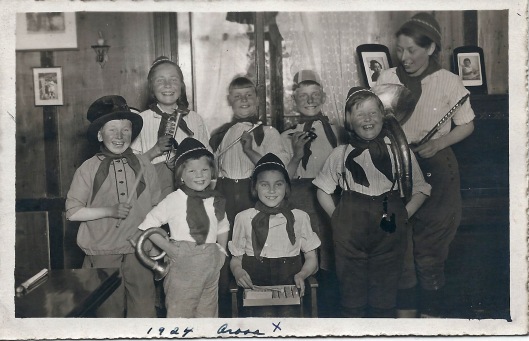 Mom, seated with the instrument in her lap.

Each week the doctor arrived to examine the children and determine who was eating properly and who was being too fussy. Weekly he pronounced small improvements in Yry’s blood counts and weight. Impatient to return home, she wrote glowing reports about her progress and the doctor’s encouragements. After eight months in Arosa, she finally received word that Daddy would be coming to pick her up and bring her home to Mainz and Mamma, and Pussy, and Birdie and . . .  She was on cloud nine.