Mt. Washington, My Life with an Enigma, pets, summer holidays in the 1920s

Family road trips, both near and far, provided entertainment as well as a foundation for understanding their new country and the history of its people. In the large cities of the Northeast, Hermann and Norah investigated museums, art galleries, and historic monuments. Yry loved these explorations. Their trips were punctuated with geography, geology, and history lessons. They visited Niagara Falls, and often went to New Hampshire, staying at Lake Sunapee or their favorite retreat at Crawford Notch.

When I found references to Crawford’s Notch among my mother’s papers and photo albums, my thought of my drive through New Hampshire’s autumn colors. I knew that my mother had loved the countryside of upstate New York, Vermont, and New Hampshire and I tried to visualize it as she might have seen it. The “Notch” nomenclature fascinated me. A notch is what I know as a pass, or a saddle, between two mountains. I remember passing by Crawford Notch and Franconia Notch near Mount Washington. Viewed from U.S. Highway 302, Mount Washington looked positively tame the day I drove by. With typical western conceit, I hardly considered those gentle-looking old hills of the east coast capable of producing the hardships that my Rocky Mountains are known for. I was shocked to discover Mount Washington’s reputation for erratic and downright deadly weather supersedes that of any of the huge western mountain ranges I admire. At 231 miles per hour, Mount Washington holds the record for the highest wind speed measured on the earth’s surface. Weather patterns from the Atlantic, the Gulf, and the Pacific Northwest converge above this little 6,288-foot peak to produce winds of over 100 mph for nearly a third of the year. My mother’s wilderness wasn’t as bucolic as I’d always imagined it.

At home, Yry had developed a few quality friendships. Ellen, with her eager and puckish smile, was the dearest. Ellen and Yry tramped through the woods and climbed trees, egging each other on to new heights. They walked their dogs through rain, snow, or sunshine, and spent hours combing each other’s hair and trying new styles. Together they dreamed of their futures. How grand life would be! What adventures lay before them! The friendship endured through junior high school and well beyond. 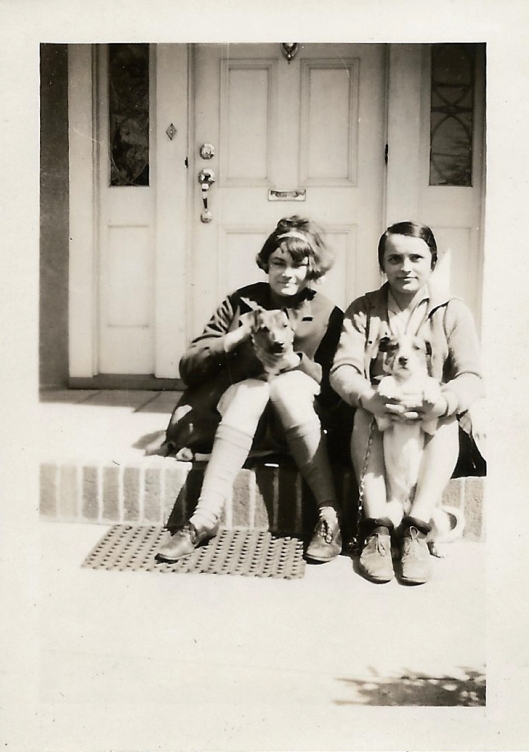 Yry’s dog, Jeff, was the object of great entertainment. He was a handsome fellow who endured her attempts to teach him circus tricks, bi-monthly baths, and her momentary lapses in patience when he didn’t understand what she expected of him. Later in life she was haunted by her abuse of this sweet dog. Through the years she added cats, kittens, birds, and more dogs to her menagerie. Younger neighbor kids like Netta Rollins and Walter Diehl were drawn to Yry and her pets. Sometimes she organized neighborhood “dress up parties.” Rather than the kids dressing up, it was the pets that had to put up with looking foolish. Jeff’s alert ears sprouting from under bows and hats give him a perplexed look in the posed photos.

I have no idea who Robert was, but I adore this photo. It looks like a Sunday pose, all spiffed up for church. Yry’s expression is a taste of what is to come. What do you suppose she was thinking as the shutter closed?