I live in a pretty cool place, as evidenced by the many “best of” lists Boise keeps landing on. Much of what attracts newcomers to Boise is related to the outdoors. We are small enough and close enough to big public lands that within minutes, outdoor enthusiasts find themselves isolated with just birds, bees, and botany. 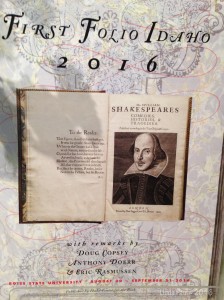 But we also have a thriving arts community. The arrival in Boise of the First Folio Exhibition, on tour from the Folger Shakespeare Library, proves my point. This amazing relic is one of 233 remaining copies of the first printed compilation of Shakespeare’s plays. Experts claim that 750 copies of the First Folio were printed in 1623, “published according to the True Original Copies” and categorized into comedies, histories, and tragedies. Prior to the printing of this hard-bound book, plays were published as small booklets made by folding sheets of cheap paper into quarters, or quartos. They were not designed for permanence. Until Shakespeare’s plays were printed in this First Folio in England, plays were not even considered literature. Their role was much like our junk food version of television entertainment.

In celebration of our friend, Will’s 400th birthday, the American Library Association and the Folger have organized a tour of the First Folio to each state in America. To qualify as a host, applicants had to provide details for the types of public programs they would sponsor, the local scholars and community organizations that would offer support, and above all, appropriate security for the book, which travels in its own protective glass case.

Resting within its glass cage, the gild-edged pages are opened to THE line in Hamlet . . .

Boise State University provided Folger with a year’s worth of temperature and humidity readings of the room that hosts the display. Ample windows in the room were replaced with UV-filtering glass. But even with that precaution, the placement of the glass case in the room was carefully scrutinized to minimize UV leakage. The Folio is guarded 24/7 and background checks were required for the volunteer docents, in addition to rigorous educational sessions they had to attend.

The First Folio Exhibit provides a wonderful opportunity for Boise’s own beloved Idaho Shakespeare Festival (ISF) to toot its horn. One wall of the room is dedicated to a historical review of the ISF’s first 39 years, complete with relics of productions past.

ISF began in the summer of 1977 as a labor of love by dedicated local thespians. 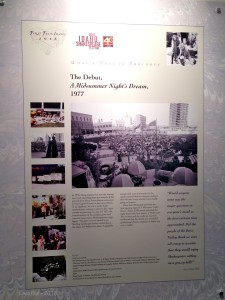 Initially it was staged as a dinner theater at a popular downtown basement restaurant with its own natural amphitheater.

The new, ever-improving grounds of the ISF

After a series of moves to temporary
quarters around Boise, the ISF finally
purchased it own home on a
lovely site beside the Boise River. 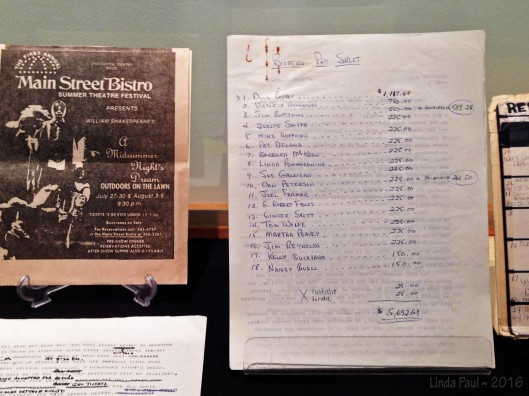 I am happy to report that the Arts and Theater are alive and well in Boise, Idaho.