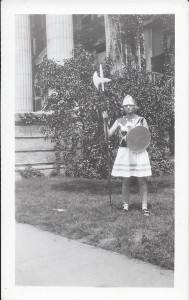 After a rocky start in the American school system, Yry made electrifying progress. In the fall of 1929 Yry performed as the executioner in the Latin play, “Atlanta and the Golden Appás,” launching a dramatic veil that would follow her through life. Since theater had played a role in their courtship, her parents encouraged her. Countless photos document the importance of this event. Apparently it was filmed. Who did the filming? I have no idea. Probably some well-meaning parent, eager to show off acquisition and mastery of the latest technology.

In the spring of 1930, at the age of 16, Yry graduated from Central Junior High School of New Rochelle. She was listed in the graduation ceremonies as Iramiris Phyllis Paul. She’d earned good grades, but lacked enthusiasm. The only schoolwork that appealed was, as always, writing. Her short story about a young man undergoing a crisis in faith appeared in the final edition of the class literary journal.

In August, she received a congratulatory letter from Grandpa Dillon. His letter was full of warmth and encouragement, something that I suspect was lacking in her home life. It is clear from this letter that he was enormously proud of his granddaughter. He included a magazine clipping of a beautiful, elegantly dressed woman, donning a big-brimmed hat, and wrote, “this is how I expect you look now, my dear Yramiris.” Several years later she photographed herself in a similar hat—the resemblance was remarkable!

How Grandpa Dillon imagined his granddaughter.

Norah still appeared stylish and well-coifed, but her body betrayed her. First there had been the thickening mid-section and then came miserable aching joints. She was often indisposed—a common phrase of the day that hinted at anything from psychoses to migraines and hormonal imbalances. Grandfather Dillon complained in nearly all his letters, about rheumatism and often questioned Norah about her own sufferings. Clearly she inherited this autoimmune condition from him. Though only in her 40’s, she often appears in photos with a cane and I don’t believe this was merely stylish affectation.

As Norah’s health deteriorated, she and her daughter knocked heads. Yry grew more headstrong and stubborn with each year. Norah expected her to behave like a “young lady.” This, of course, did not include climbing trees and racing through the woods perched on a bicycle. As tall as her mother and well endowed, she looked older than her years. Her classmates were excited about balls and coming out parties. Even Cousin Verena, whom she so adored, reported in letters from Germany how much she loved her dance lessons. But Yry scorned dancing. Hiking through the woods was more her style. Some days, she’d tramp five miles through the forest, dreaming of horses, mountains, and cowboys. Her dreaminess distanced her from classmates and she found school tedious. Secretly she harbored a suspicion that she was brighter and a deeper thinker than some of her teachers.