Continued from Life in the Big Apple

“So, ah, what other careers did you try?” I asked, recognizing a rant brewing and eager to move the story forward.

“I’d always loved the theatre, so I enrolled in drama classes. But it didn’t take long to realize that the precursor to roles that I was interested in was a roll in the sheets. That was not for me.”

Finished with my salad, I absent-mindedly traced designs in the remnants of dressing in the bottom of my plate. This sounded so mother. That last comment reminded me of the times as a kid I’d been downtown with her and she’d hustle around a street corner, grumbling about the lecherous old men ogling her bust or her legs. Always so dramatic, so certain she was the center of the world. At this time I’d heard only vague allusions to her experience with the French soldier, which I had of course dismissed. Even as a young woman accompanying my mother on a sightseeing adventure, I considered her reactions overly dramatic.

She continued the narrative. “Then I went back to writing. Children’s books were selling like hotcakes, so I thought maybe I could sell some stories to youth magazines and children’s book publishers.” Her eyebrows greeted each other like a pair of caterpillars as she rumbled about writing literature when all the publishers wanted were heroic fantasies. This revelation predated my discovery of her packet of failed submissions.

Our young waiter cleared our salad plates and a slightly older waitress, hailing from Michigan, arrived with the bottle of wine we’d ordered. Dinner was on its way, she assured us, as she filled our wine glasses.

I looked at mom quizzically, afraid to interrupt this unusual information dump by debating the merits of children’s literary needs.

“My father wanted me to come work for him at the office. I kept putting him off. I really had no interest in his business.”

My mother was rootless in the city. Her strolls through Central Park and visits to the zoo were no replacement for woods of New Rochelle. Her tomboy tendencies gave way to new adventures: museums, galleries, off-Broadway theatre, concerts, clubs. With her camera and notebook as companions, she walked about the city looking for interesting angles. 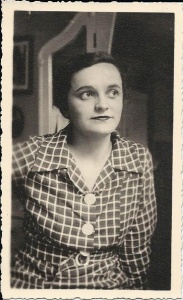 Her friend Ellen often came to the city to shop and explore the fashion world. They’d race home with their purchases and experiment with new hair styles and make up tricks. They took black and white portraits of each other, practicing both serious and sensuous gazes into the lens. Ellen resembled actress Helen Bonham Carter.

The girls frequented night clubs and nice restaurants in the city. My mother looks stunning in a photo snapped atop the Barbizon on the Upper East Side—a hotel with strict dress codes for young professional women. They were two lovely girls looking for fun, excitement, and a future amidst the beat of the big city. 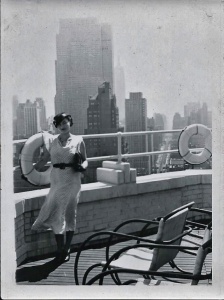 On weekends they sometimes escaped with several male friends to the countryside in a beautiful Chrysler. These were interesting diversions for my mother, but the young men were vacuous and transparent. She longed for a relationship with more substance. 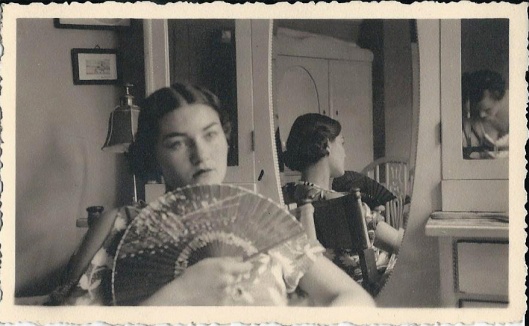 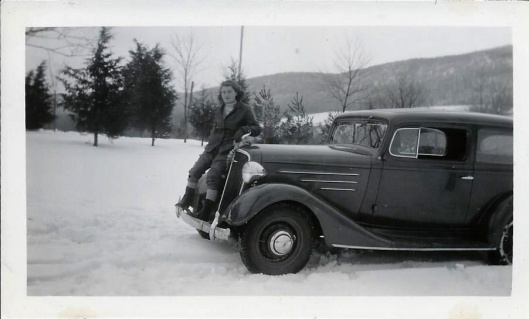 Even as she crafted a new existence in the city, depression lurked around the edges. Each time she stepped into the hell pot of summer heat or dirt encrusted snow and smog of winter, my mother cursed Adolf anew.