I’ve done a wee bit of trail maintenance work; little jobs, close to home, day jobs that end with a hot shower immediately followed by a restorative nap. Last winter, between skijinks, I cast my mind to the future, to summer. The Idaho Trails Association posted several week-long trail maintenance projects on their website. These would be pack-supported trips into areas where I have spent little to no time. I signed up for one in early June and one in late August, both in the Seven Devils Wilderness Area.

Prior to this, my longest backpacking trip has spanned no more than three nights. Could I survive a whole week without a current bush? Could I survive a whole week of manning a Pulaski? A McCleod? A shovel? A crosscut saw? A week before the project was to begin, an email announced that due to the remaining snow drifts across the trail, the pack team would not be available. The road to Windy Saddle trail head was barely passable. We would be required to pack in all our personal supplies plus the necessary tools!

This was not what I had signed up for! I was sure I could not survive the rigor of hauling seven days worth of food, plus tent, sleeping bag, clothes, water, and other sundries in addition to the hard physical labor of trail work. I almost cancelled. But there were only six people going. Pulling out of such a small work group would be unfair to the others. But then again, hauling out my dead body would also be unfair to the others. I bit my nails as I weighed and measured and stuffed stuff into my backpack. I worried; I had nightmares; I worried some more.

The day finally arrived. After a five-hour drive from Boise, we assembled at the Windy Saddle campground. The trail was in such awful condition that we decided to camp the first night right there at the trail head. Bearing day packs and tools, we worked for several hours that afternoon. It was hot. The trail starts out high but descends something like 500 feet in half a mile. We cleared our way down the trail as far as the first water source. The late afternoon sun smirked as we sweated back up to Windy Saddle. With each laborious step I worried about how in hell I’d get back up that steep grade on the way out with my full backpack and tools in hand.

During the night, I saw the biggest meteor streak across the sky that I have ever seen in my life. I half expected to hear a thud as it hit the earth. The next morning dawned rosy and hopeful. Shrugging into those heavy packs, off we went down the beautifully cleared first pitch of the trail. The going was delicious. (But not far from my mind was the ominous thought of coming back up that hill!)

It was another brutally hot day. The snowdrifts were quickly melting. So was our enthusiasm. By lunch, drinking water was low. We augmented by melting snow on a black plastic bag and filtering the resulting liquid. By late afternoon, we came to an enormous, four-trunk tree blocking a switchback. Hikers had been crawling up the scree field around this tree for several seasons. We hacked away at this mess until an impending thunder-storm forced us to pack up and head down to lower ground and a campsite near water.

It rained that night. No meteor sightings for this exhausted camper.

We base camped out of our location by the river, working both directions: back to repair a rock wall across a long scree field, and forward to continue clearing out trees and rebuild water bars for proper drainage across the trails. The mega stump remained in the crook of the trail to mock us. It would be our last assault as we hiked back out at the end of the week. 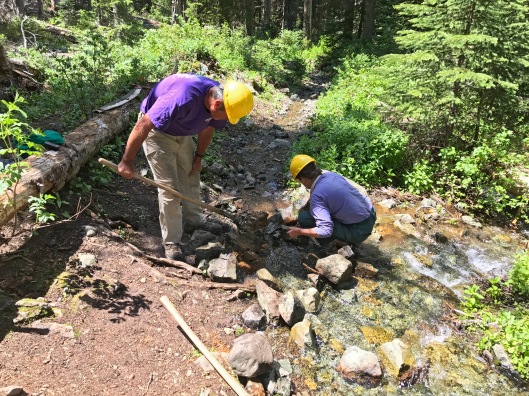 Re-engineering a blown out water bar 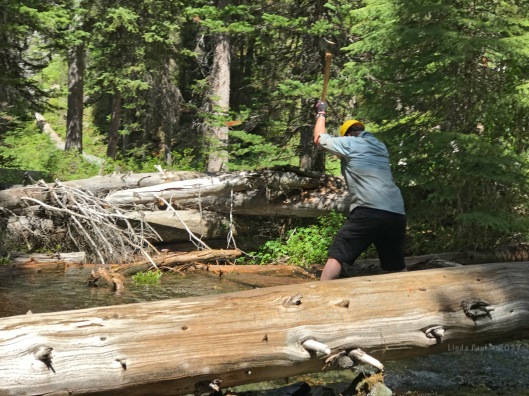 Clearing the trail by any means possible 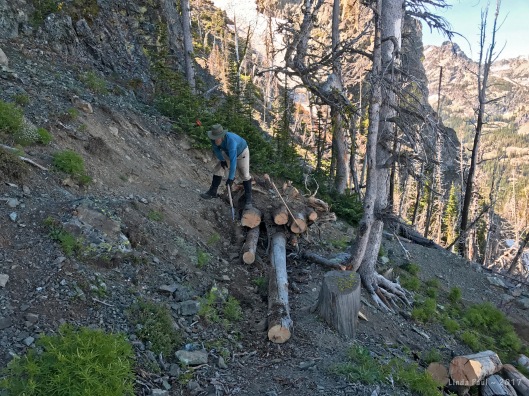 A final assault on the stump

A last lunch break and view of Dry Diggins Lookout before our return to the cars at the trail head. Job complete. Oregon’s snowy Wallowa Range in the distance.

I survived. I packed my own smelly body, plus my pack, plus a double-bit ax out of the Seven Devils Wilderness. Now, I hope to heavens that the August trip will truly be pack-supported because I’m dang sure it’ll be hotter than Hades.