Continued from Fences and shopping:

Life on the CX ranch was not always serious. In light of America’s war efforts, for the first time in many years the Sheridan-Wyo-Rodeo was cancelled, which focused all the more attention on the September horse races. Dallas rode George’s prize filly, Miss Flash, to victory in the Futurity, providing good cause for celebration with drinks and dinner at the Sheridan Inn.

Dallas, Yry, & neighbor at the Sheridan Futurity (the horse is identified as Knottingham, so perhaps they had more than one horse in the race.) 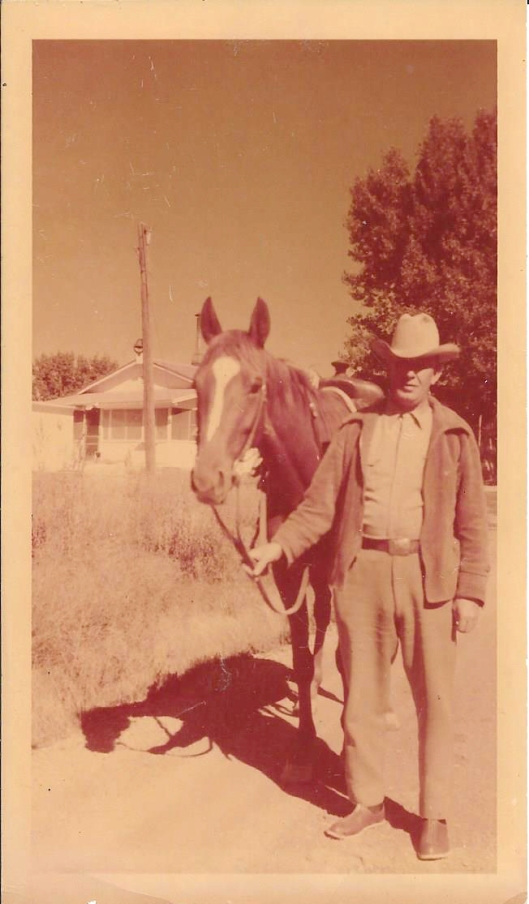 A few mornings later, Dallas tossed Silver’s reins to Yry and said, “Here’s a horse, go bring the rest of ’em in.” Eagerly, she galloped across the horse pasture. With her best cowboy whooping and hollering, she expected to gather the horses into a nice little group and race gleefully ahead of her toward the corral. No self-respecting horse is going to comply with such helter-skelter treatment. They split, circled around and stopped to stare at her in two pods of amazement. She tried again to circle around and spoon them together like peas, but they splintered off in several directions like sparks from a hot fire. Meanwhile, back at the corrals, her performance was the entertainment du jour.

Sept. 1942 Yry on palomino Silver, and on sorrel Alegria

Yry craved to blend into her surroundings the way a lizard becomes part of the ground. But her striking looks and serious demeanor flashed like a parrot’s feathers. As always, her speech set her apart. Cowboy vernacular is punctuated by shrugs, tics, and nods of the head that impart subtle meaning to the incomplete sentences that slide past juicy hanks of chaw, stashed in cheeks or behind lips. Yry’s proper grammar and tinges of British, German, and New York accent branded her a foreigner and brought subtle grins to the faces of the cowpokes she met. Even as she picked up and mimicked the slang, she missed the cadence of western speech. Her background once again held her apart from other people. Her naive enthusiasm provided endless entertainment at the CX Ranch. She was the dramatic lead in a cowboy movie. The drama of her role took the sting out of what might otherwise have been painful ridicule.

You can’t live in Wyoming without being able to drive. She knew her way around street cars, trolleys, buses, and subways. But at the age of 29, she had yet to drive a car. One morning she went with Dallas in an old beat up truck to return some plumbing supplies that had been loaned out by a neighbor. Dallas stopped in the middle of the deserted dirt road and got out of the truck. Walking to her side of the truck, he opened the door and nodded for her to slide over. She gawped in surprise. He nodded again and commanded, “Git on over there behind the wheel.”

The steering wheel was huge. She could barely reach the foot pedals. After a few fumbles with the clutch they lurched into motion and crept down the road. Steering was practically unnecessary on this straight road but up ahead was a gradual descent down a long hill. The truck’s momentum increased like a marble rolling down three flights of stairs. She stretched to jam her foot on the brake, but the brakes in this old beater were more decoration than reality. Her panic rose in direct proportion to the descent of the truck. Miraculously they made it to the bottom without disaster. From that day forth she became the world’s most faithful brake tester.

8 thoughts on “Cowboy Up”