Continued From one greenhorn to another

A great privilege was bestowed upon Yry when George offered his own horse for her to ride. Because of an old back injury, George didn’t ride much and he said the horse needed exercise. Before long she figured out why George seldom rode. His horse, Golden Fleece, was a beautiful, showy, four-year-old palomino gelding with flowing cream-colored mane and tail. He was calm and gentle, but riding him was akin to managing a hobby horse attached to a pogo-stick—better for parades than for work. Golden Fleece’s stiff-ankled lope jarred her right out of the saddle. Horrified, she resorted to grabbing leather to stay anchored. Eventually she worked out a swap with Dallas. He suggested Allegra, a pretty bay mare with a heart of gold and a quiet, easy going, obedient nature. Yry and Allegra spent many hours together and developed a fine friendship.

Branding was a shock of violence. But this was an important aspect of successful ranching. Yry had found her niche at last; she would become a rancher and spend the rest of her life living off the land and raising beef cattle. Branding was something she’d just have to work out in her mind. She cringed at the first, shocking bawl of a small calf when the hot iron seared it’s flesh, painting the air with an acrid, burned-wool odor; her own skin pricked in vicarious agony. In quick succession several more calves were run through the chute and the procedure was repeated, along with the castration of the males and earmarking—accomplished by punching a hole in the right ear. The calves stumbled out of the chute on wobbly legs, bleating miserably for their mammies. The air thickened with the warm, iron scent of blood, shit, and scorched hair. When she placed this 60 seconds of painful drama beside the heartache and misery she had suffered throughout her life, it made sense in an odd way. We must all endure pain and suffering. These animals had the good fortune to live in contentment, safety, and abundance. The price they paid for their kept status was this momentary pain—surely no worse than childbirth. Life is a circle. Yry reckoned that as long as man continued to eat meat for subsistence then the gruesome tasks of ranching had to be accomplished right along with the pleasant ones. She reconciled herself to the fact that branding was necessary, therefore, squeamishness made no sense.

She steeled herself against the plaintive sounds and nauseating smells and pitched in, eager to prove herself and to learn everything she’d need in her future life as a rancher. At times she was ordered to deliver the hot irons from the fire to the man applying the brands. Sometimes she had to help with the smaller calves who were too little to run through the chute. These had to be roped from horseback and then from the ground two people held the calf down, stretching it’s head and back legs to keep it still and taut while a third person applied the searing irons. She became adept at straddling a calf’s neck and holding on for dear life to prevent it from squirming and ruining the brand.

Branding Sept 42. This one is a foal. 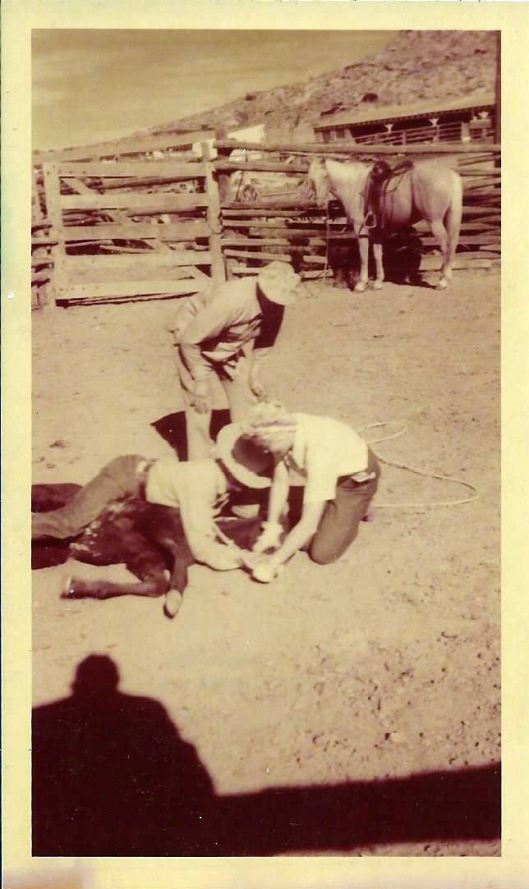