Continued from Starting our for a grand experience

On January 5, 1943, Yry again boarded a bus, this one destined for Laramie. As the bus digested distance, she noted “an endless land that seems to have existed forever—miles upon miles between towns and even between ranches.” The bus passed through tiny Wheatland. Just past midnight the bus pulled into Cheyenne for an hour layover. Yry left the station to explore the state Capitol by twilight. In the dark, she clutched her coat tightly around herself and strolled along Capitol Avenue from 15th to 17th streets taking in the stores, cafes, the Elk’s Club building, movie houses, and bars, all of which looked bleak and deserted.

Back inside the station she sat in a secluded corner and observed her fellow travelers. One man served up funny stories to a clot of people who frequently erupted in outbursts, guffaws, and applause. There were a few dark-skinned people—either Mexican or Indian, or both. (None in leathers and feathers though!) A Chinese or Filipino soldier wore dark glasses and Yry imagined him as a Japanese spy in disguise. Most travelers were dressed in jeans, boots, and leather coats. One lady wore a red velvet turban perched upon a head of tightly curled grey hair, with a black veil, fur coat, high heels, and of all things, slacks—still celebrating a New Year’s Eve masquerade ball?

The bus arrived in Laramie at 4:30 in the morning, too late to waste money on a motel so she hung around the depot till advancing sunlight began uncloaking empty streets. After a light breakfast at the Connor Hotel she began the mile-long walk to campus for an 8 o’clock appointment with the Dean of Agriculture.

The dean was friendly and helpful. He summoned Professor Johnston to give her a tour of Laramie and help her find a place to stay, which she found downtown near the bus depot and hotel she’d just come from.

Yry plunged into Wyoming academia like a bear into a huckleberry patch. She took her assignments far more seriously than her more seasoned classmates, nearly all of whom were raised on ranches. Three women were enrolled; the oldest, a woman of about 50, befriended her on the first day. Mrs. Miller was the daughter of an esteemed professor of botany. Her husband was a banker who had purchased a ranch south of town. Yry disdained the other woman in the class because of her fancy clothes and fastidious avoidance of dirt. This woman claimed to own a sheep operation, but Yry decided she must be running it by remote control. Yry’s studious discipline must have been a source of irritation to her classmates. But she kept them entertained with frequent and unexpected questions.

The classes, divided into three-week sessions, included topics such as sheep production, animal husbandry, feeds and feeding, crop plants and soils, wool production, dairying, beef production, agricultural economics, seed analysis and weed control. Due to war-time shortages the farm repairs and tools class lacked much of the equipment that they should be learning to maintain, so she used her time and resources to outfit herself with handmade halters, spurs, bridle, and chaps, all of which she was very proud of and which she prized for the rest of her life. 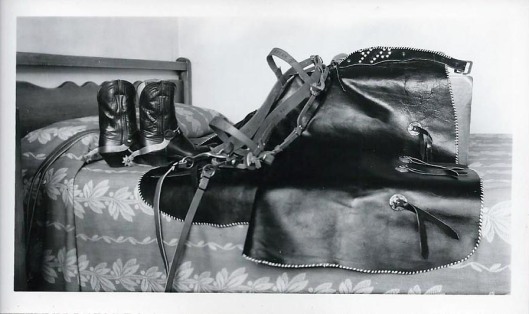 The Lazy U courtyard

An annoying seepage of soft coal dust from the trains crept through cracks and gaps in the windows and door of her apartment, prompting a move to the Lazy U Motel, which was closer to campus and had a small fridge and hotplate. Her letters home were full of pride about everything she was learning. She nattered about how “You easterners don’t know what a real steak is.” Ditto “real butter and real cream.” However, in practically the same breath, she berated the locals. “You westerners need to just get acclimatized to your own climate!” Of course, she was never bothered by the cold spells that prompted water-cooler complaints. Always the outsider, this woman.