Continued from A question of origin

After the dishes had been cleared and washed, we pushed the dining table to the side and relaxed on a small sofa, an easy chair, and the dining chairs. Out came Schnapps and Punktion, Lore’s private term for that special punctuation at the end of the meal—rich dark, Dutch or Belgian chocolate with a red wine chaser.

The conversation slipped effortlessly into German.  I sat, the silent observer, listening and watching; straining for telltale clues from talking hands, and listening deeply to sieve the few stray German words I recognized and string them together, tryingt to tread water in the conversation. My ears on high alert, I noticed how my mother’s German speech differed from theirs! Though she was fully fluent, there was a slight—a nearly imperceptible accent—not the typical American accent that garbles the German language into a horrendous guttural gack. Her accent—my God! I realized it was the exact same indefinable accent that infiltrated her English speech! I grinned with recognition and considered what distinguished my mother from convention.

Not only were mother’s speech patterns different from those of local Wyomingites, but her pronunciations were different as well. First of all, she pronounced words—all the sounds and syllables, unlike the slurred western tongue that stretches some vowel sounds while combining others and running words one into another. Mother didn’t have a British accent. Nor did she have a German accent, or  New York, or East Coast. Mother’s speech was an amalgam of all the places she’d lived baked into a unique, layered confection that set her apart no matter where she was.

I considered the times strangers had shocked me by claiming that I have an accent. But my accusers could never establish what kind of accent I had. Do I sound like my mother? I don’t think so. As a child, my peers bullied me into proper pronunciation and word choice. It’s crick not creeeek; ruf not rooooof. It was never a couch, it was a sofa; not an ice box but a fridge.

“Nein, nein,” I replied, struggling to form a sentence. “Ich verstehe etwas.” I understand some. Then, trying to prove my clever ability to decipher, I repeated back what I thought they had been talking about. Giggles erupted. I was way off. A pattern that continues to this day.

So, for a while, the conversation switched back to English. But eventually, complex ideas took hold and they slipped seamlessly back into German. Hours passed. I was exhausted, yet entranced.

Suddenly, I was again the focus of Nelly’s observation. She was speaking German, but looking at me as she did so. I picked up “so like Willy.” Nelly was commenting not just on my physical features but also upon my expressions and mannerisms. Her husband Willy , brother of my grandfather, uncle of my mother, had died many years ago. I’d seen photos of him. He was a thin man with a mustache, pointed features, a large beak and sunken eyes. Of course, I hadn’t really considered it at the time, but I’m sure those images recorded a man who was on the point of starvation just after the war. 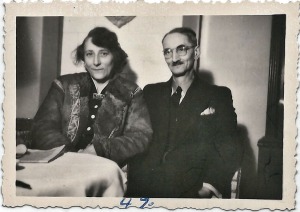 Nelly & Willy after the war

One of the many WWII stories that surfaced repeatedly, was of the first care package to arrive in Berlin. Mother had included lard along with tins of meat and veggies. No one had consumed animal fat or protein in ages. Uncle Willy eagerly devoured a tower of lard on a slice of dark bread. The richness landed in his stomach, did a 360 flip and came back up. The poor man made a mad dash for the outhouse and lost his false teeth along with the lard. As I write this, I question my memory. Is it real? Right or wrong, the story is a symbol of what war and starvation mean.

In any case, at that moment, with all eyes directed my way, heads nodding in recognition and respect, I felt as if the warm rays of god’s light, streaming through the clouds, had landed squarely on me. I had already recognized Lore’s stark features as my own. She wore her looks so gracefully that I felt ashamed of my own vanity. All those years of ruing my thin, lifeless hair, thin lips, and hawkish beak seemed frivolous in the light of this strong woman who had lived through astonishing atrocities and survived with a serenity and joy for life that was a model for lesser human beings.

And then there was her mother Nelly, with a nose every bit as large as my own, beautiful as she approached the last years of a long and difficult life. Her dark eyes flashed under thick, dark eyebrows that remembered the original color of her curly white hair. Dressed in a simple black dress with a pair of gold necklaces for trim, she imbued a quiet elegance inside and outside the domain of her kitchen. And she beamed at me with unmistakable delight, seeing in the tilt of my head or the look of concentration knitting my brows, a flicker of her beloved husband come to life before her eyes.

I looked again at Hermann and at Lore. Yes, we all shared something—a hardness around the jawline that draws to a point at the chin, narrow faces, small and narrow eyes—in short, there is a shared angularity in our features. I am too good at masking my feelings. I’m quite sure no one in that room comprehended the seismic shift that began in my soul that night.

16 thoughts on “A sense of belonging”