My Life with an Enigma, single women in the 50s

Behind our house, on Garfield Street, an elderly, single lady lived in a duplex. With short, tightly curled, grey hair perpetually corralled by an auburn hair net; wire-framed glasses that distorted her eyes, and clunky black shoes, she became my surrogate granny. She spent her days in an upholstered chair beside the window, her swollen ankles propped on a low ottoman, a black and white television flickering advertisements, Jack Parr, soap operas, and in the evening; news, then Mitch Miller and The Honeymooners. Her hands were perpetually in motion, either with a pair of knitting needles or a crochet hook. There was something tragic about her life that I never fully understood. I remember whispers about her husband, who had died many years earlier, and her grown son, who ignored her. 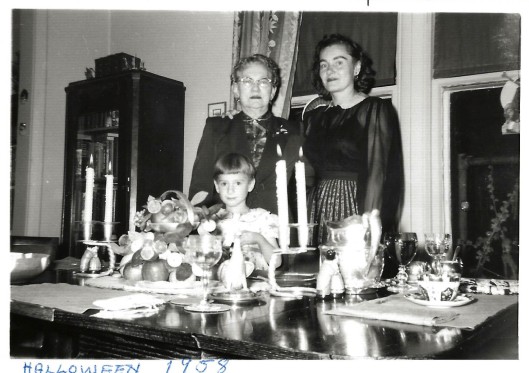 Mrs. Borher joined us for dinner

On the south side of our house, facing ninth street, was a completely different situation. That stark, two-story house trapped three lives. Old man Dereemer, with a long, narrow face, lined like a topo map of the Colorado River tributaries, ruled over his boxer dog, his daughter and grandson. They lived secretively behind curtained windows and locked doors; their grassless back yard was hidden from prying eyes by a six-foot, wooden fence. The only sign of life was from the boxer who frothed with rage at the neighborhood kids who walked down the alley, dragging a stick along the boards of the fence to stir up trouble. Occasionally, the big wooden gates to the alley swung open and all three Dereemers plus boxer would emerge in a rickety blue pickup truck and disappear for the weekend.

It took a while, but mother eventually befriended Virginia, a tall, angular woman with long, straw colored hair, metal-framed cat-eye glasses framing steely blue eyes. Not only was Virginia’s stiff-shouldered appearance intimidating, but her voice was harsh and cold. She frightened me. Her son, several years younger than I, was never allowed out of the back yard or even to play in the grassy front yard. Instead, he was caged, like the dog, in that dusty back yard or inside the fortress of a house. Occasionally mom would drag me along for a visit. The two women would sit at the kitchen table, kibitzing over cups of coffee while I was assigned to play with Allan on the bare, wooden dining room floor. I never liked that floor because I feared getting a splinter from the rough wood, but it was surgically clean. Virginia had only a few rag rugs which she beat mercilessly with a broom because she didn’t own a vacuum. She swept and washed her wooden floor every day, along with practically every other surface in the house. She had little control over her life, but what she did control, she ruled fanatically. One day she glimpsed me rolling one of Allan’s toy trucks over the top of his head to his giggling delight. She barreled out of the kitchen and grabbed me by the arm; jerking me to my feet, she yelled that I should know better than to put that dirty, nasty toy on her boy’s head! I was shocked. I had no idea that a kid’s own toys could be considered dirty and that there was a right or wrong way to play with a toy truck. Heck, I had no idea how to play with a little boy, period. Allan’s giggles ceased instantly, his shoulders rounded, and he stared mutely at the barren floor.

Like me, Allan had no father. There was some awful story about him being a drunk or a gambler or something. I don’t know if he was banished or if he had simply vanished from the rigidity of that household. I suppose this mutual manless state was the glue that cemented mother and Virginia’s friendship. It was hard to imagine that a husband could have been any worse than Virginia’s father. We never visited when he was home, and we could often hear him, from inside our own house, berating his daughter with unmentionably cruel words and an occasional resounding slap.

So, I dreaded visits with Allan, looked forward to visits with Old Mrs. Boring, who often chummed me with a plate of oven-warm cookies, and eventually I met some of the other neighbor kids. Before that first summer came to a close, a chain-link metal fence encircled our yard. It served the dual purposes of marking my boundary of freedom and containing our constant and mercurial hodge-podge of four-legged housemates. Some of my new friends seemed to think I was a prisoner, as I stared out from behind those metal strands of confinement. But they had no concept of the big city prison that we’d escaped.

My new friends from down the block watching our kittens play. Grade school visible across the street.

And it seemed that our plumbing would never be reliable. Mr. Tracy continued to visit our house. He was a kind, older gentleman who never failed to notice me and to say something funny. I loved when the doorbell rang and I’d open the door to find Mr. Tracy standing there with his tool box and his Dick Tracy hat.