The story of Gorongosa National Park (GNP) is one of tragedy and triumph. It parallels the story of Mozambique and it leads the way for the future of the country, which was under some form of  Portuguese control from the 1500s until the end of a ten-year battle for independence in 1975.

As early as 1920, the Gorongosa region was recognized for its beauty and abundance of game animals. Troubles for the GNP and the country did not end with independence from Portugal. Shortly after independence, civil war racked the country until 1992. The civil war was a blood bath for the people, the wildlife, and the environment. Millions were killed, maimed, displaced, and traumatized. Wildlife that survived battlefield death either starved or  were harvested for food and resources like ivory that could fund the war machine.

In 2008, GNP, the government of Mozambique, and the Greg Carr Foundation signed an agreement for joint management of the Park with the dual goals of restoring its former ecological and environmental splendor, and as a model of modern conservation practices. Although political unrest continues to plague the country, the park has been a central stabilizing force. More than 200,000 people live in the area of impact around the park; most farm small plots of land. GNP has introduced new techniques to improve crop yields and to win over the hearts and minds of their neighbors. By introducing the idea of sustainable tourism as a means for economic development, the park has provided jobs for hundreds of Mozambicans who work in construction, guest services, and as highly trained park rangers and guides. 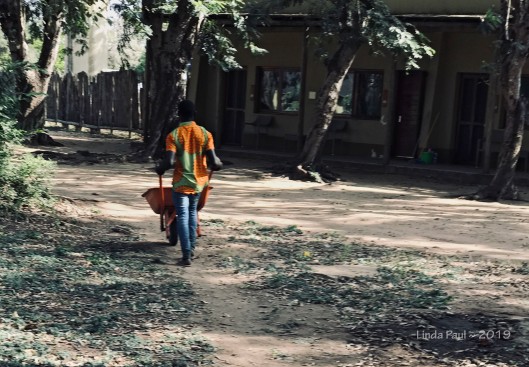 Under protection of the government and dedicated park rangers, the animals are making a comeback. (My own Zoo Boise contributes a portion of their proceeds to fund the Park) 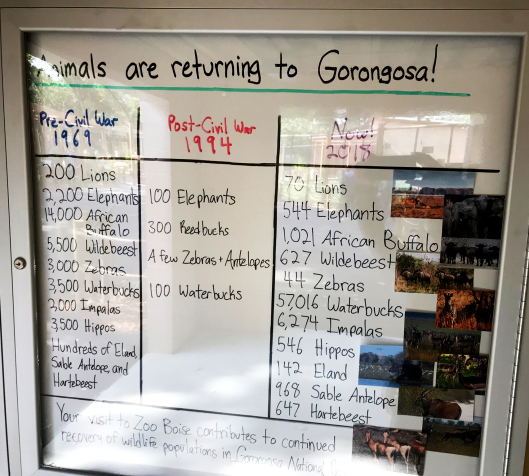 The pillar behind these successes, is native Idahoan, Greg Carr, a philanthropist who made his millions in the tech industry. He turned his brilliance, money, and abundant energy towards humanitarian issues, the crown jewel being GNP.  His goals are to:

In an effort to achieve the first goal, GNP established an innovative agroforestry initiative with socio-economic and environmental benefits. Gorongosa Mountain was once covered in a tropical rainforest; part of a rainforest that used to extend across the continent, supporting an explosion of wildlife. What trees weren’t ravaged by war, were burned off by farmers who replaced them with cash crops like corn. Now the mountain is being replanted with endemic trees. Below the canopy of tall trees, shade-loving Arabica coffee trees are the source of a new economy. The lives of neighboring farmers are being enriched as they tap into the coffee bean market and develop new sustainable farming methods. Research into animal and bird behavior is ongoing.

On our drive through Gorongosa Villa and along the long, bumpy road to the mountain, I felt like a rodeo queen being celebrated by adoring fans as little children ran up to the road from their nearby homes or fields, waving and yelling animated welcomes to the tourists. I think they wanted candy, too. 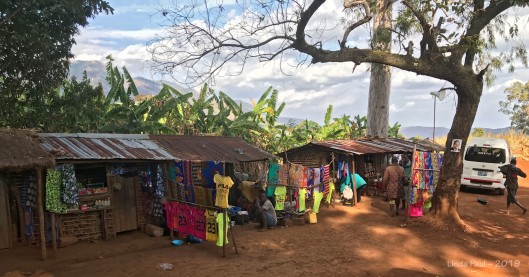 During my stay at GNP, the big event of the week was the arrival of “The Senators.” Great effort went into welcoming Idaho Senators Risch and Crapo and their wives. The warthog wrangler had to clear the landing strip of pesky warthogs prior to the arrival of The Senators’ airplane.

Greg Carr personally invited all his guests to a large dinner party out by the firepit, with local staff leading the crowd in singing and dancing after the meal. The baboons and monkeys headed for the trees. I’m not sure what happened to the Senators. I saw one of them looking a little sheepish as he was pulled into the dancing line. 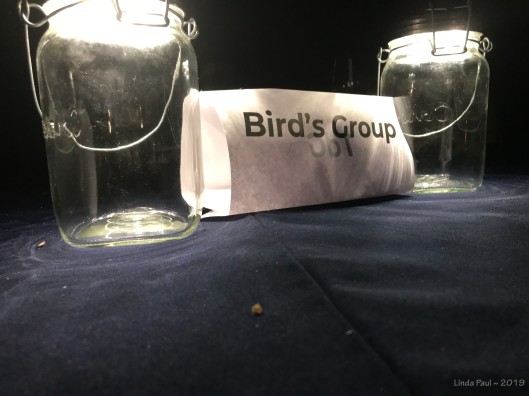 8 thoughts on “The byte-sized story of Gorongosa”