Ski trips are a gamble. Arrangements must be made in advance, dates blocked out, reservations booked, and then Mother Nature takes over. All the historical weather records in the world won’t guarantee optimum conditions for the destination. But what the heck. Come mid-winter, a road trip promises a break in routine at the least.

The car was stuffed with multiple layers of clothing and footgear for myriad weather conditions, skis, snowshoes (in case the skiing is that awful), snacks, and anticipation. My friends and I headed north for the border. A day of driving over not-bad roads, brought us to Rossland, B.C.. First ski destination: Red Mountain Resort, a ten-minute drive from the Prestige Motel. A bluebird day greeted us for our first day on the mountain. It’s always nice to get a good visual feel for a new mountain. Groping through fog on unfamiliar terrain is daunting, to say the least. 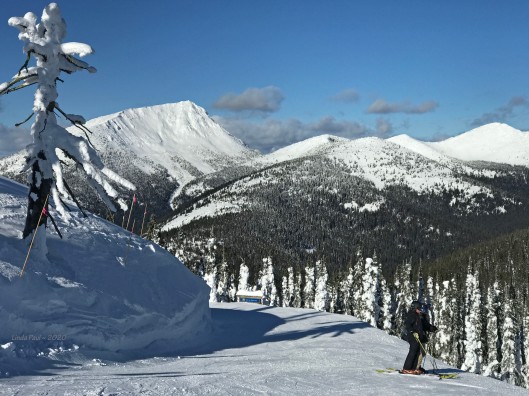 As luck would have it, this entire region had experienced a warm spell and rain the week before we arrived. Then the temperature dropped and a few inches of snow blanketed the frozen crust that lay below. The groomers were smooth as butter. Vast off-piste glades glistened in the bright sunshine, begging for fresh tracks. But oh, no! What lay beneath that inviting layer of fresh snow was akin to roller skating across a lava field. It could be done, but no guarantee that fillings wouldn’t dislodge before common sense took over. It took several attempts before I got it through my thick skull that I needed to stay on-piste.

After a fabulous day of skiing, a little Apre Ski at the new on-site Josie Hotel. We also enjoyed two fabulous breakfasts and dinners at Gabriella’s Restaurant, attached to the Prestige Motel. 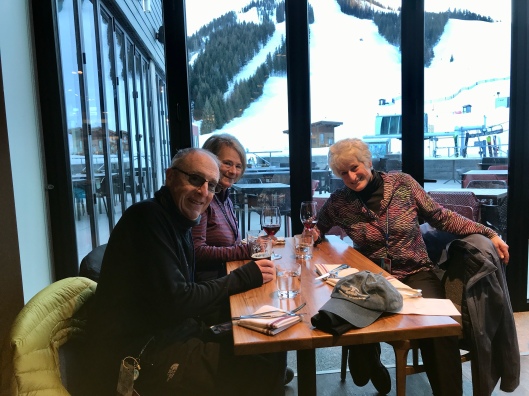 The next day was a bit cloudier, but still fun. After getting our fill of nice groomers, we headed east to Whitewater Ski Resort in Nelson, B.C.

Perhaps the most notable part of our stay in Nelson was the AirBnB that looked from the outside like something one might find deep in the Appalachian hollers. The Tyvek outside of the building; lack of garage door; greeting from Bella, the Newfoundland; and snow obliterating clues as to the entrance to our “unit” had the three of us wondering what we’d gotten ourselves into. Eventually, however, we groped our way to the external staircase that led to a very comfortable two-bedroom basement apartment with a fully stocked kitchen. Don’t judge a book by its cover. 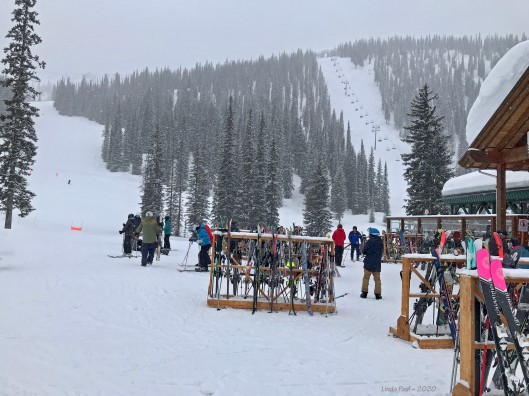 Our first morning at Whitewater presented that daunting scenario of fog on a new mountain. The snow conditions mimicked those at Red Mountain. I couldn’t resist diving off into the inviting glades of trees where the snow looked pristine, but skied like lava. People were jolly and polite and the bathroom signage was even jollier.

Our second day at Whitewater revealed the beauty that had evaded us the day before. That night we celebrated my companions’ 43rd anniversary with dinner at the historic Hume Hotel. We were the only diners in the dining room that night.

Next we headed south to Schweitzer Mountain Ski Resort, thirty minutes from Sandpoint, ID. Here we basked in comfort and cordiality at the Stonehouse Airbnb where we were given free range of the house, including fabulous kitchen and living room.

Schweitzer had also suffered the same weather conditions as our previous destinations. Again, I kept testing those fillings to see how solid they are. The most notable thing that happened was when power to the Stella lift and the adjacent Outback pub went out. Apparently a tree limb had fallen on a power line. Stuff happens. We congratulated our luck at being in the pub not on the lift when this happened. Power was eventually restored.

With just a few days left, we headed east again to Kellogg, Idaho for a day of skiing at Silver Mountain, where we found familiar snow conditions under a peek-a-boo sky. Lodging for our last two nights was in an old cottage in nearby Wallace, Idaho.

Our last ski day was perhaps our most fun day. We skied at Lookout Pass on the Montana/Idaho border under bright blue sky, as seen in the header image. The snow conditions here were the best of the trip, with about 6″ of new snow that smoothed out the many inviting off-piste glades between wide-spaced trees. With only three lifts, we quickly got our bearings and enjoyed three sides of this fun playground.

We rounded out the trip with tasty cocktails at the Lookout bar.

12 thoughts on “On the road again”