Thin slashes of crimson pried openings between the dark, angry clouds clashing overhead. Indeed, the sun was rising behind the …

After cycling 42 miles and getting drenched, the comfort of the Roosevelt Inn beckoned. No wooden-ruler-wielding teachers roam the Roosevelt school-house these days. The old building, now listed on the National Register of Historic places in Coeur D’Alene (CDA), houses a bed and breakfast guaranteed to provide restful nights and  lively breakfast conversation. Old class pictures line the hallways and individual rooms honor well-remembered teachers. 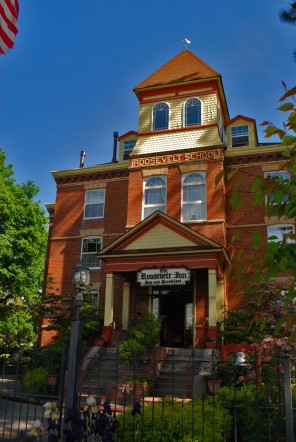 On day three of my adventure, I woke to the smell of coffee, blue sky painted with puffy clouds, and a forecast of afternoon thunder and lightening storms. On this day, I was determined to ride a loop on the Trail of the CDAs. I had no trouble finding the trailhead at Enaville. The first segment of my ride would be on pavement, heading in the direction of the previous day’s bike ride. Again, I sailed along, enjoying myself immensely. Muddy moose tracks ambled across the path and horses grazed contentedly in belly deep grass. I rode over several bridges and pedaled past Cataldo. Several campsites looked like inviting alternatives for cyclists who prefer to rough it. 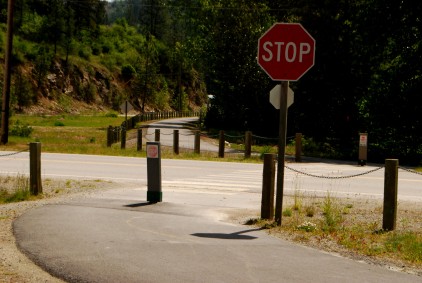 An inviting extension of the trail, headed toward Wallace. 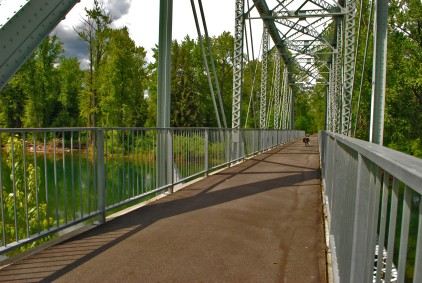 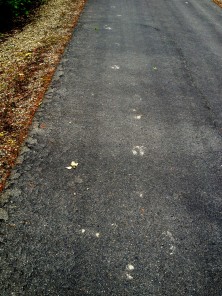 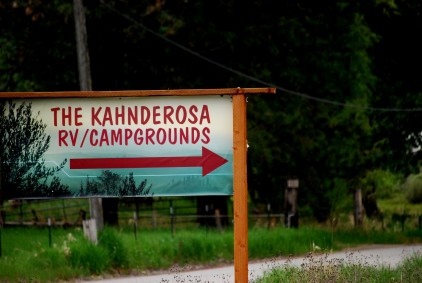 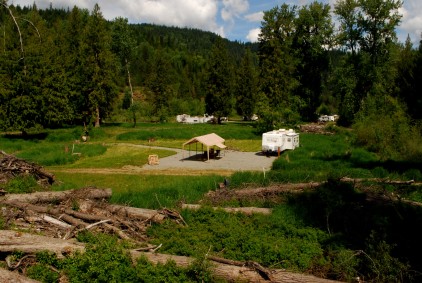 At Latour Creek I stopped to consult my map and route instructions. Holy cow! I was within 3.7 miles of where I had stopped the day before—almost connecting the dots; but this meant I had overshot the turnoff by almost two miles! I backtracked to Cataldo. I reread the instructions on the Friends of the CDA Trails website, which bragged that riders from age 8 to 60+ ride this loop each year to commemorate the Summer Equinox. I had to find the old CCC Road which begins the dirt climb. I pedaled in circles around Cataldo looking for this CCC road. “Go over the bridge and turn right,” said the bartender at the Cataldo Inn (which is really the Cataldo Roadhouse.) Hmm. I saw the bridge that crosses I90 and dumps traffic onto the freeway. I saw the bike bridge on the CDA trail I’d just gone and come on—multiple times. Finally, I saw a bridge heading east on Canyon Road. And there, on the other side of that bridge over the CDA Rriver, was my CCC Road. 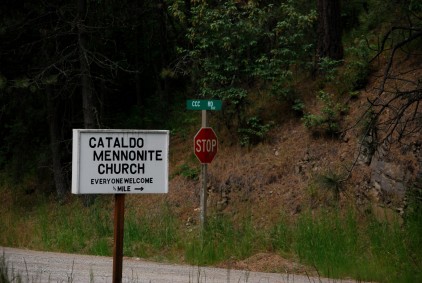 The dirt road looked innocuous. I was prepared for a bit of a climb, but heck, if 8-year-olds can do this, how tough could it be? Right? Perhaps I should have paid closer attention to the text that said, “the next couple of miles rise at 6-7% grade.” 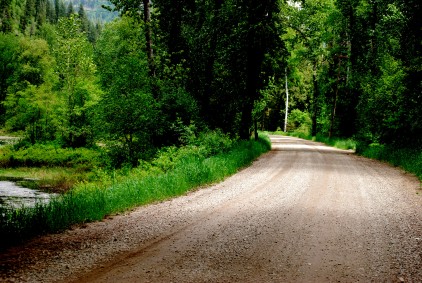 By now, I’d burned valuable time looking for the trailhead and the predicted storms were brewing not so far away. I negotiated the first hill with no problem. This’ll be a piece a cake! Then came the next rise. Whooee, this is a bit steeper   . . . and longer. Good God, will it ever stop rising? That’s about when I looked across a canyon and saw a road rising waaaay up. That can’t be this road. . .can it?” 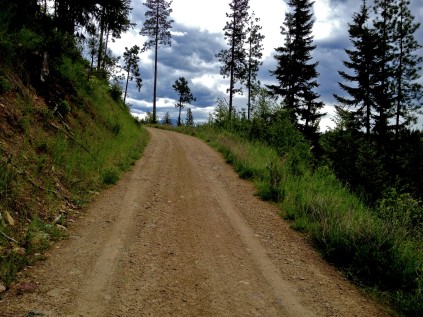 I pedaled. I pushed. I grumbled. Mind you, dear reader, I am not one of those paragons of fitness who barely fills out a Size 3. No, I have a Size 12 ass to haul uphill. And the freakin’ clouds were lurking—ominously. How the hell high is this gonna take me? I’ll probably crest the summit just as the lightning storm hits. Cheeerist, Linda!” I briefly considered retreat. Briefly. I hate to give in, even to my own stupidity. 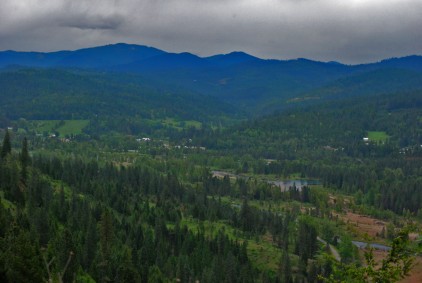 Overlooking the CDA River valley from the CCC Rd.

Accompanied by thunder inside and outside of my head, I finally summited. The view was spectacular, but I had time for only a hasty photo. Next I had to keep my wits about me so I wouldn’t repeat the mistake of the young whippersnapper who flipped his bike in front of me on flat, smooth pavement yesterday! I coasted carefully down, down, down, till at last I recognized the paved trail below me. Just as I thought to congratulate myself, a fire-breathing border collie rushed from a ramshackle property. “Ha! Smell ye a letter carrier, eh?” I growled as I hurtled past flying snot without missing a stroke.

My lone car welcomed me back to the parking lot at Enaville. The mileage was only half what I’d done the day before, but calorie for calorie, it was a hell of a work out. I was just locking the bike to the car when the sky opened up and the rain came sheeting down.

That wrapped up the biking portion of this adventure. Next, let’s see what urban mischief I can find.

Continuing from the last post, another drive through dense forest brought me to Harrison, Idaho. Like most of the little burgs in Northern Idaho, in its youth Harrison supported the timber industry. Its location southeast of Lake Coeur D’Alene (CDA) has aided its survival and transformation into a cutesy tourist town. Again, I struggled to locate the bike trail; although it was at the city marina—right under my prodigious nose. 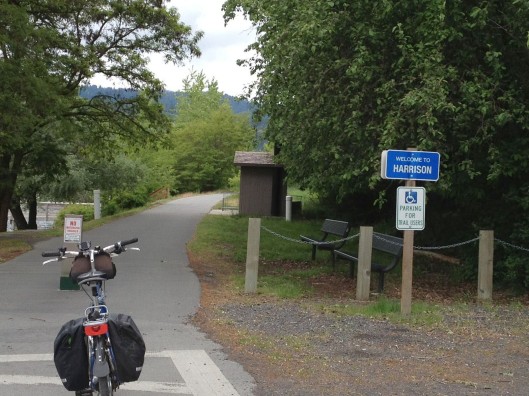 Bike off the car and ready to go. Headed northeast from the Marina. 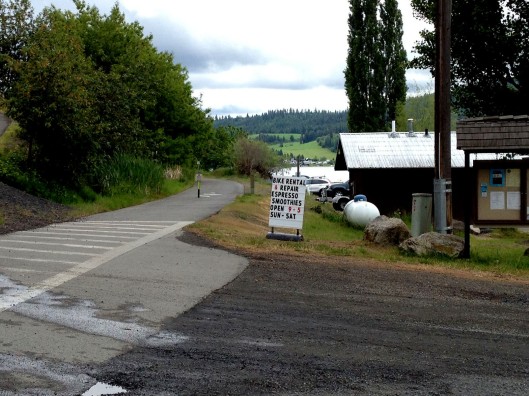 Looking behind me to the part I missed.

The Trail of the Coeur D’Alenes is a paved bike path built upon an abandoned railroad line. The trail begins in Plummer Idaho, crosses Lake CDA on a huge bridge and then follows the CDA River for 72 miles to Mullan. At Harrison, I was 15 miles from the official start of the trail, on a portion known as chain lakes, as it passes through marshes that seam a series of lakes into a rich wetland. Storm clouds swirled around the mountain tops that bowl the river valley. 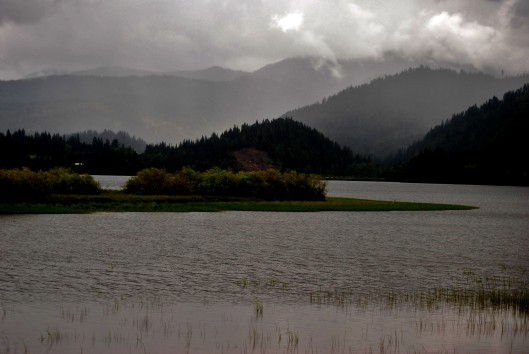 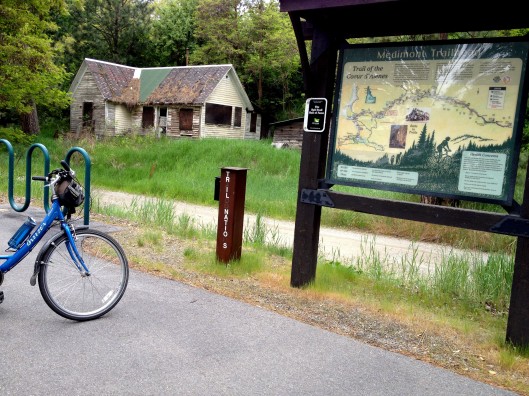 I pedaled a little over 20 miles to the ghost of an old lumber town called Dudley.  Once home to 300 rough and tumble loggers and a few hardy women, all that is now visible from the south side of the river are falling-apart wooden lumber slides from which I assume logs were rolled down the embankment to boats waiting in the river.

The experience was worth the long drive and the hunting and pecking that lead up to it. Eyeballing roaming storms in all directions of my horizon, I kept thinking, Ya oughta head back to the car before all hell breaks loose. But I was mesmerized by the rich community of marsh birds on either side of the path. In addition to the mundane ravens, crows, robins, geese, ducks, and sparrows, hundreds of herons, stoically posed, still as stalks of marsh grass, as they waited for breakfast to swim by. Osprey nests graced nearly every power pole in sight. I saw bald eagles, pelicans, swans, grebes, orioles, red-winged blackbirds, killdeer, terns, swallows, tanagers and a comical trio of vultures feasting on a fish head in the middle of the path. Actually, I saw so many lost fish prizes dotting the path that I thought it might better be called the Trail of the Lost Lunches. 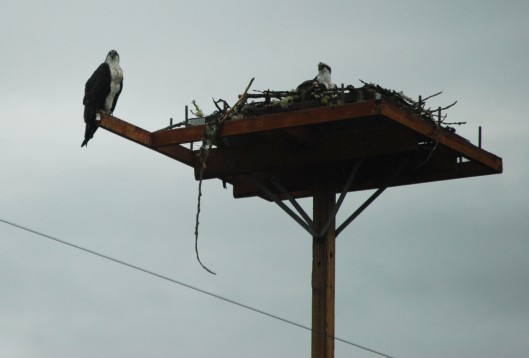 Osprey nest; Worried parent buzzing my head in next pic. 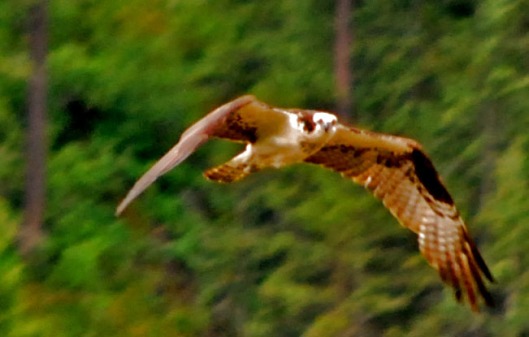 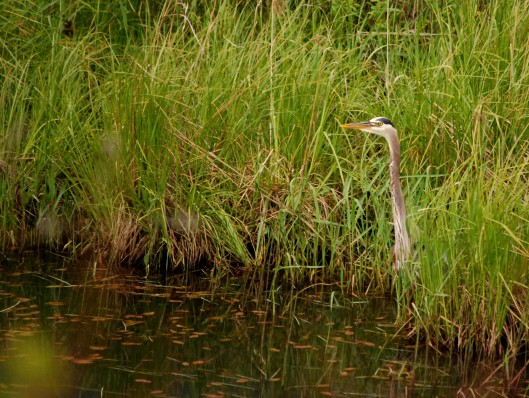 Heron fishing; in next pic, spooked. 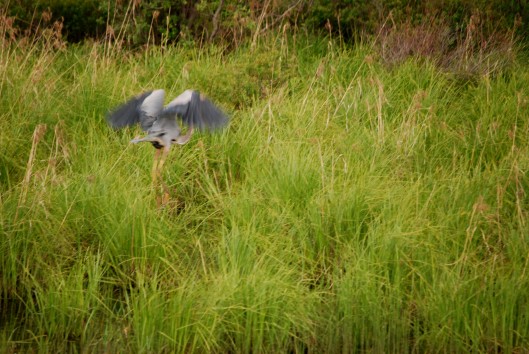 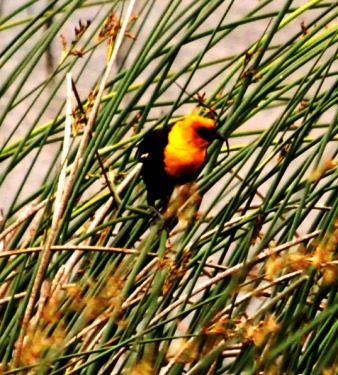 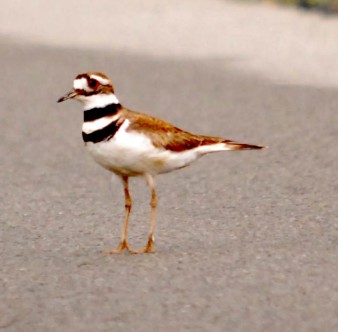 Killdeer…”my nest, stay away from my nest!” 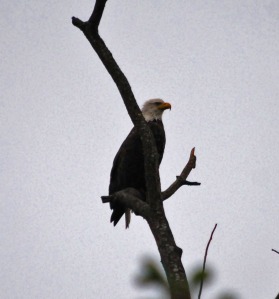 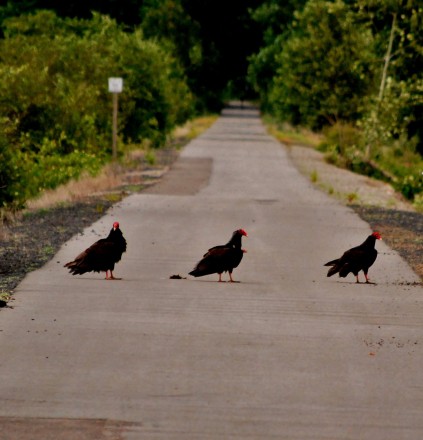 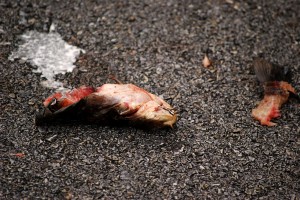 Trail of the Lost Lunches

At one point, an osprey flew over my left shoulder clutching lunch to her belly. If she’d lost her grip, I’d have been stuck with her smelly lunch in my hip pocket! The going was effortless; a small voice harangued me: If it is this easy, the way back will be that much harder. You’re probably benefiting from a slight decline and maybe even a tail wind. But another voice tempted and taunted: Just a little farther, what’s around the bend, on the other side of this rise? Sure enough, after several hours of lazy cycling, frequently interrupted by picture taking and gawking in general, I stopped for a snack at one of many picnic tables beside the trail. Munching an apple and some nuts, I imagined the sights and sounds of Dudley in the 1800’s, before this railroad line even existed. And then it came. I knew it had to happen. The errant storms had gathered. A fierce wind whistled down the path from the direction of Harrison . . . and my car. A fierce rain storm was cradled in the headwind. 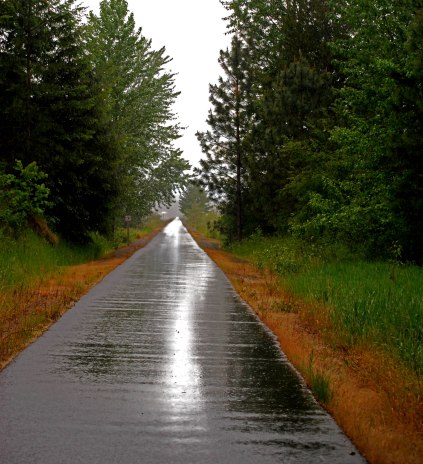 Even with water dripping off my helmet and my soaked pants plastered to my thighs, my spirits tread water. The birds, though mostly hunkered down, still trilled and whistled as I puffed against the headwind. Exertion kept the damp chill at bay. In about ten miles, the rain diminished and little shafts of sunlight stabbed the clouds. Birds emerged—back to the business of the day, fishing.

I’d almost given up on seeing a moose on anything but a trail brochure, when I glanced at a distant marsh over my shoulder and there she was! Check! Moose—from a safe distance.

During my hours on the trail I saw one pair of local cyclists, a father and son thru-travelers spinning from Butte, Montana to Spokane, Washington, and 12 to 15 college students who may have been part of a cycling club. As a reminder to pay attention, one of them performed an unplanned flip in front of me. Young and rubbery, he got up, dusted himself off and confessed, “I was going too fast.” I think he clipped the guy in front of him. 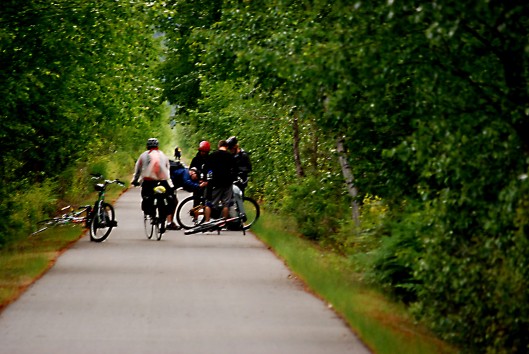 Just before reaching the parking lot I noticed turtles sunning on a log in the marsh. 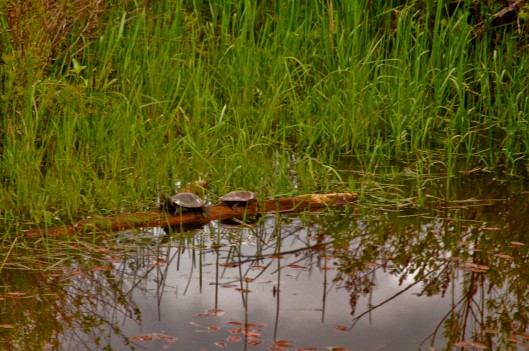 A glass of wine and a hot shower awaited me at the Roosevelt Inn in CDA.

I’m lucky to live in a community with such lovely recreational opportunities. Even when the mercury heads for triple digits …