How can we collaborate in a sea of sharks? Before we can begin to influence public policy, we need to shape public opinion. Individually we are little more than pesky voices shouting into the wind. But when we join forces our power multiplies exponentially and that is how public opinion grows legs. 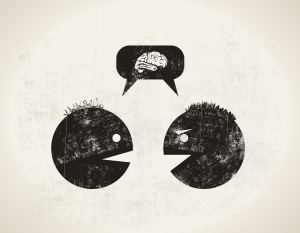 Before we can hold our leaders accountable, we must be accountable to ourselves and to each other. We must rediscover the lost art of negotiation. Compromise is not a dirty word. Compromise is the only way that a democracy can work. There is absolutely no possibility of meeting each individual’s agenda in a country comprised of over 316,000,000 people with myriad colors, religions, beliefs, and cultural backgrounds.

Below I paraphrase Dr. David Adler, author and national lecturer specializing in public law, the Supreme Court, the Presidency and American political thought, in what he calls Five Modest Suggestions to Improve Public Discourse.

Reasoned Discourse requires understanding and accepting the scientific method. Just as we must listen to other points of view, we must also support our arguments with factual evidence, not with hyperbole, rumor, or wishful thinking.

Shaping Public Policy requires us to demonstrate to others how our ideas will benefit them. Once we have learned to talk openly and honesty with each other in small groups, and have learned to listen for that which unites rather than that which divides, then we can implement a unified voice to shape public policy through fact based letters to the editor and emails and phone calls to our representatives. Legislators are powerless against rising popular opinion. Numbers talk!

In Idaho, the top-down implementation of the Luna laws (among other things) offended Democrats. The purchase of expensive technology required by the Luna laws (among other things) offended Republicans. Each side had a vested interest in undoing that legislation and by working with each other rather than against each other, education policy that the Governor and the Superintendent of Public Instruction had lobbied hard to put in place was successfully unraveled.

As an example of what I consider reasoned discourse, I offer the following link to an opinion offered by an Idaho official regarding a highly controversial topic in our state. The article appeared in the Idaho Statesman on January 29, 2014.Lawrence Schoen: Idaho needs a new wolf management structure

Where do you look for information upon which to base your decisions and beliefs?

America is blessed with wildly varied geography and landscape, encompasses over 51 degrees of latitude and nine standard time zones; …