The Qur’an and Sayings of Prophet Muhammad, is a wonderful introduction to the Islamic faith and the Qur’an that guides it. Written in 2007, in response to the rampant misinformation about Muslims and their faith spawned by 9/11, the book attempts to explain some of the basic truths about Islamic history and messages from the divine word of God.

Translated Qur’anic passages and quotations of the Prophet Muhammad appear on the right-hand pages with footnote indicators that correspond to contextual explanations of those passages appearing on the corresponding left-hand pages. 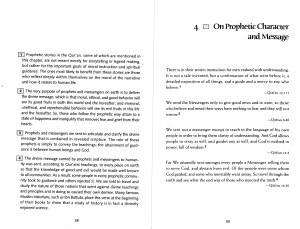 This book, like all books, is influenced by the core values and beliefs of its author in what passages were or were not selected to include. It is further dependent upon the rickety reality of translation of an ancient language, which is meant to be recited, not read. And we must remember that annotator, Sohaib N. Sultan, is human. His learned explanations carry with them his own interpretations and biases. But overall, the book explains to the western reader some of the religious laws that govern Islamic faith.

Several key passages that are often used as arguments against the faith are explained in their contextual reality. For example, in most places, the Qur’an instructs peaceful and gracious coexistence with Christians and Jews. In one place though, Muslims are instructed to kill Jews and Christians who prevent them from honoring God in their way. A reader needs to realize that this revelation from God to the Prophet Muhammad occurred during a historical period of brutal persecution against Muslims. With historical context, the logic is clear: If you are attacked, you have the right and the duty to stand up for yourself and for God as you know God.