The first image on Nandini’s post, Wintery Silences: River Beas, captured my heart and my attention. How could a river …

Where would mankind be without fire? Would we have survived without the warmth of flames? Without fire, would all humans be huddled around the Equator like a Championship Belt?

Besides warming us, sanitizing our food and medical gear, and moving us from place to place, fire is a friend to the environment too. But during the long, summer months of the fire season, wildfire seems like anything but a friend to man, animal, or land. I wrote about the first notable fire of the season in Idaho two months ago.

The lightening caused Tepee Springs Fire began on the morning of August 12, 2015. By the end of August this forest fire had blown up to 80,000 acres, caused the evacuation of ranches and small communities in its path and closed roads and campgrounds. Surging on ferocious winds, the fire grew by 30,000 acres in just one day, forcing firefighters to back down and closing the Salmon River to all fishing and rafting. The fire jumped the Salmon, a premier white-water rafting destination, stopping 109 rafters in their wakes and forcing them to wait for evacuation because the river and the roads out of the area were too dangerous for travel.

I recently drove along the Salmon River to the end of Forest Road 1614. Over two months after the initial spark, the roadblocks are gone and fishing has resumed. The still-burning fire is contained south of the river and continues to smog the air near and far, contributing to some pretty spectacular sunsets. Looking up at the wall of the canyon, even the rocks are scorched. Wait, rocks don’t burn . . . but the moss that grows on them burns. 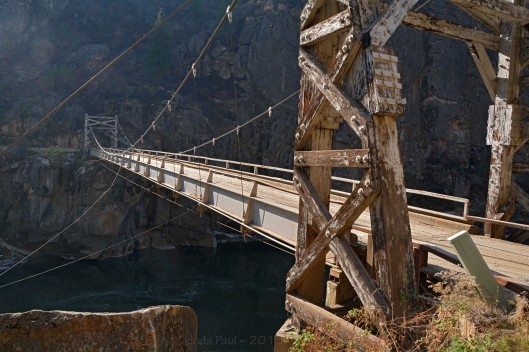 A ferry was originally placed in this location to accommodate mining travel between the boom towns of Florence and Warren, Idaho. In the 1930s the CCC constructed the Manning Crevice bridge at this location. As reported by Don McRitchie,

The span of the bridge is 240 ft. and it is 327 feet long between anchorages. It is supported by eight 1 1/2 in. diameter cables, and has a capacity of 16 tons. The wood guard rails act as stiffening trusses.

All I can say is that driving across this bridge was scarier than negotiating a boulder field solo with tired legs. Imagine negotiating this with massive fire fighting equipment and firefighters—with flames licking at your gas tank! 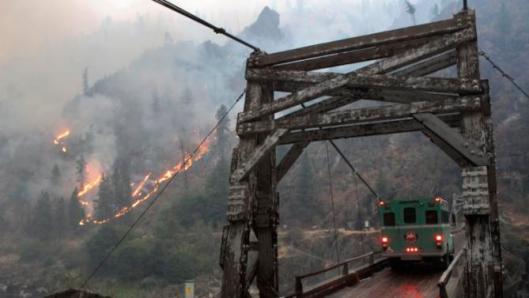 In places where the fire burned the hottest, the land looks anemic. Heat has stripped it of its glorious color. Even so, the land is resilient and designed to heal itself, as evidenced by the shoots of green popping up beside the road. 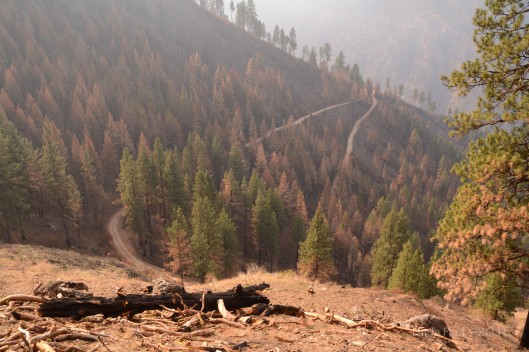 Part of the cycle of forest life, fire opens the undergrowth to precious, life-giving sunlight to spark new life. Normally the Burgdorf Road, snaking up the mountain, would be lost for the trees. 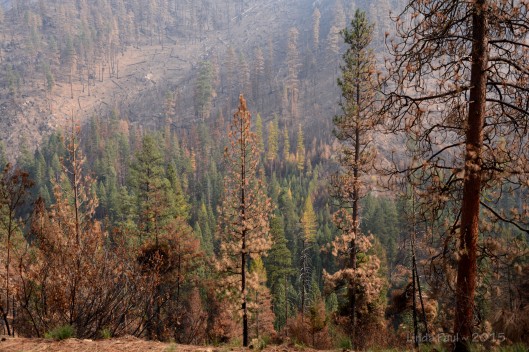 Fire is erratic. It burns fiercely hot in some areas and leaves other little patches untouched. Peeking through scorched trees, we see unscathed forest, complete with fall colors of the larch trees. And in 20 years, new growth will be as tall as I am, I may well be ash, and a new crop of animals will hunt for seeds on the forest floor.

It is very hard to remember that despite the momentary devastation and discomfort fire brings, it is a natural element in the cycle of life. We and our drying climate have just provided it with an over-abundant amount of fuel.

Each fall I spend a week in McCall, Idaho, a small mountain town north of Boise. It is a peaceful …