My blessings seem obscene in light of the misery visited upon the families of Superior and Louisville, Colorado. On the …

Everything new becomes old. This December has certainly been cold. The coming year will be filled with political rhetoric. Don’t …

I admit it. I was pushing the season. It’s been a dry year, a low snow year. Despite mellow temperatures, the snow was long gone from the Boise front range, golf and gardening were in full swing. Even so, I know that it’s dicey to head for the high country in May. I just had to do it.

I awoke to lenticular clouds polka-dotting the blue sky and a severe cold snap in the forecast.The car was loaded, fueled, and ready to go. I had a few errands to run so I got a late start. As I left town, the party-blue sky had disappeared behind a canopy of thick grey that stretched from one horizon to the next. I shook my head at my own folly.

Less than ten miles north of town big, fat, sullen snow flakes began to attack my windshield. They looked preposterous as they drifted down to rich green fields. Despite a growing conviction that I was the stupidest person on the planet, I continued my drive through the snow storm. The flakes were melting as they hit the pavement. The storm would surely not last. The road was empty, as I knew the mountains would be also.

Even if I chickened out and returned to my dry bed at home, the sights were charming. After two and half hours, I arrived at Peace Creek trail head. The sizable parking lot was empty, but for my car. I watched the flakes falling from the sky. They were becoming lazier and lazier. But so was I. I tipped the seat back and closed my eyes for a catnap.Thirty minutes later I startled awake. Good grief! Why am I sleeping in the middle of the day? It was still snowing—very lightly. Should I go or should I stay? As I mulled the possibilities and peered at my map, I heard a scratching noise. I looked up to see a puffed up mountain bluebird perched on my rear view mirror.

That was my answer! Go! Of course, you must go! Whadya have to loose? Are ya worried that yer hair’ll get wet, ya little ninny? I suited up and marched off toward the bridge over Peace Creek. I quickly recognized that I was plenty warm. The wet earth imparted an intoxicating perfume. Water droplets bejeweled everything, turning the mundane into the Queen’s jewels.

Before long, I realized that it had quit snowing. I tromped along the well-marked path, brushing past wet foliage and chastising myself for wearing cotton cargo pants that wicked moisture toward my knees. Unexpected little accumulations of snow enchanted me.

I hiked about three miles, stopped finally by a river that later in the year would be nothing more than cool therapy for hot feet, but today looked forbidding. This was enough for today.

As I retraced my steps, everything my eyes fell upon touched my soul.

Damp Ponderosa Pine bark attracted my sniffer. Have you ever smelled a Pondy? They send out the most delicious aroma of vanilla bean and chocolate. Who needs mocha when there’s a Ponderosa nearby?

When I stopped for lunch, I couldn’t resist reaching for a large milky quartz. I know, you’re supposed to leave things as you see them, but heck this rock was right in the path, ready to trip some unsuspecting hiker. So, after fortifying myself with the sandwich from my pack, I hefted this 6.5 pound rock into the bottom of the pack. I’m just like my mother. The quartz is a stellar contribution to my back yard.

This photo tells a story: the story of the big bad wolf. That camera lens cap is 2″ in diameter. The canine print above the deer track is about 4.25″ long. (It doesn’t look quite that big from this angle, but I have another shot of the paw print right beside the lens cap. Trust me. It’s BIG.) I love that my woods are no longer completely sanitized of large, four-legged, predators.

By the time I got back to my car, the sky had cleared, all but for a few clouds. I replaced my wet socks and boots with clean, dry socks and shoes and proceeded to explore the countryside a bit more by car before finding the perfect campsite from which to eat my dinner, watch a nearly full moon snake through the trees, and hunker deep inside my down bag. In the morning there was frost on the grass and frozen puddles to verify how damned cold it got during the night.

It’s been a rather grim winter in my little corner of the world. Looking out toward the mountains, all I … 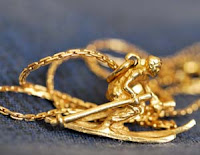 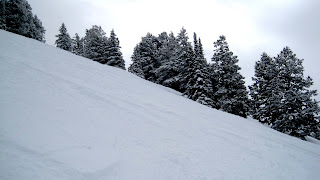