Continued from The Twister, continued My other memory of that multi-day, cross-country journey in the old gray Chrysler is the …

I was a lucky kid. I grew up sharing the house and front yard with animals. In particular, I was …

The event of the summer when I was a kid was Jubilee Days. END_OF_DOCUMENT_TOKEN_TO_BE_REPLACED 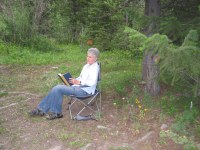 The month of August is nearly half past already! What happened to summer? We all say this. But really, what is going on with time? Remember when it used to take for-absolutely-ever to get from one Christmas to the next? To get from one summer to the next? The summers always passed quickly—compared to the loooong school year. But, back then summers zoomed at the speed of sound, while now, I swear they fly by at the speed of light.

I really thought that time would ease up during retirement. I had visions of sitting on the porch with a cup of Joe and a book, watching the world go by. That sounds slow and relaxed. That sounds darn right boring, truth be told. I have yet to spend enough time sitting on the porch watching the world go by for it to become boring. I’m still craving the down time that implies.

There are still not enough hours in the day—even during the long days of summer. There are too many mountains to climb, too many books and magazines to read, too many sentences to be developed, too many words to cut, too many photos to struggle with, too many notes not yet played, too many luncheons and walks with friends left unscheduled, too little time for peering inside the hollow cavern of my skull to see if there’s anything valuable in there.

Dang it, does anyone have a day-stretcher?