family dynamics, My Life with an Enigma, nonfiction, Truth, writing

When I stopped posting new Enigma material, someone asked about my writing process. It feels a bit disingenuous for me …

As many of you know, My Life With an Enigma has been an ongoing project for over two decades. I’ve dithered …

Long before laser printers and warp speed word processors, long before the first sheets of papyrus recorded human presence, our ancestors engineered ways to shout, “I am, I say.” Not only did early Homo sapiens devise ways of communicating their existence, but examples of their expression have endured the centuries. One wonders how long our Cloud data will survive.

Given an abbreviated life span of 20 – 35 years, one also wonders how early humans related to time, to history, to posterity? Did the person scratching and pecking outlines of animals on smooth rock walls conceive that this work would record flora, fauna, and life style to future generations? Did artists, who mixed iron-rich clay to paint pictographs from humble to astonishingly beautiful, intend to leave a record of their existence or merely to communicate their presence to other clans? Or were they simply doing what the muse required of them? Theories abound, but definitive answers evade the might of modern science.

Ancient artistry is often hidden underground or deep inside caves that have yet to be discovered. Southern Idaho sits atop the remnants of ancient volcanic eruptions. Lava flowed across the land  through hardened conduits of quickly cooled rock which created underground tubes and caves. These lava tubes sheltered humans and animals alike. The smooth rock walls formed a natural canvas for ancient graffiti. Through the centuries, the lava tubes collapse, their smooth walls crumble apart, landing willy-nilly like a collapsed Trade Center.  Miles upon miles of collapsed lava beds pepper this part of the state. It takes sharp eyes paired with sturdy hiking boots to find works of ancient art where crumbled walls have fallen open to reveal the treasure left by some small, sunburned artist from long ago. 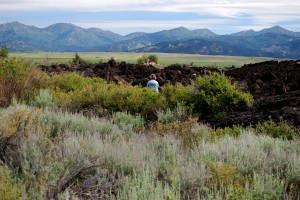 Searching for the Idaho tablets 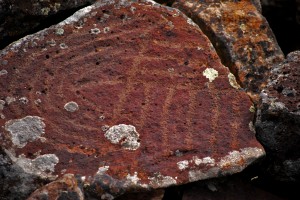 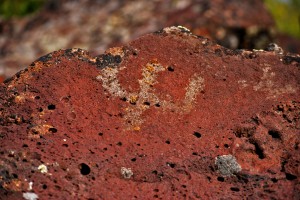 These petroglyphs are located on private property where only a handful of individuals know of their existence. I was following the footsteps of a local. Even though she knew where they were, it was difficult to zero in on them. 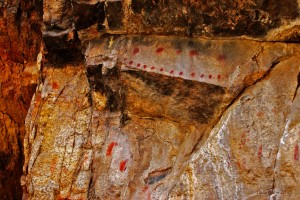 Pictographs painted onto rock wall of a cave 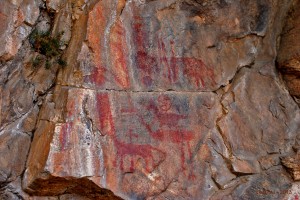 I am only a casual observer. I do not know the age of these ancient writings. An expert eye might pick out modern graffiti mixed in with the pictographs. That would be unfortunate but not unexpected, given their location in an area heavily used by white-water rafters.

The evidence of  diligent rock-bloggers suggests that the need for expression is as innate as our need to procreate.

(Click on the images to expand for greater detail.)

Renee Johnson from ReneeJohnsonWrites has honored me by hosting my guest post on her blog. Wow. I feel so . …