How do you see yourself? You look in the mirror and you see the familiar face that’s stared back at you for years. Maybe you agonize over your narrow eyes, or an uneven complexion, or a nose that turns up at the end or humps in the middle, ears that poke out of the veil of wispy hair. Whatever you see, I can guarantee that it’s different from what everyone else sees when they look at you.

By now, I should be resigned to the image that stars back at me. I’m old enough to realize that we all suffer the same crazy self-criticisms. But don’t put me in front of a mirror beside another person. My critical brain can’t resist the urge to compare and I come out the loser every time. 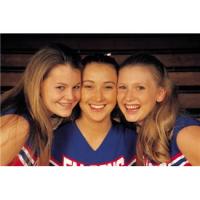 I remember the agony of junior high PE classes. We were required to strip down and shower, under the watchful gaze of the PE teacher—a dreadfully humiliating experience to begin with and one which would not be tolerated today. After the showers came the dressing and primping. Girls lined up elbow to elbow under long banks of fluorescent lights glaring over long banks of mirrors to do their hair and makeup. I was so mortified by the stark reality of my image beside those of the other girls that I learned to do my hair by feel. One day, acting on a midnight brainstorm, I waited until the girl I thought of as the ugliest girl in class was standing by herself in front of the mirror. I crept up to the right of her, expecting to look bearable by comparison. What I saw staring back at me was even uglier than the ugly girl. I gave up after that, resolving to simply not look in the mirror unless I was completely alone.

I also remember going to the department store cosmetics counter, prepared to pay for a stranger to transform this duck into a swan. I emerged as a goose, with an empty pocketbook. To this day I fall prey to the niggling hope that a newly purchased shade of eye shadow or lipstick will enhance reality. But reality is in my head and neither makeup nor elegant hair styles will transform what’s in there.

Lately, I’ve noticed a most intriguing phenomenon about self-image, one which I share with a growing number of people. My self-image has lost track of my age. This becomes obvious when I try to age strangers, something I used to do quite accurately. We tend to use our own age as a benchmark in estimating other people’s age. A person is either about the same age or is younger or older by decades. This evaluation gains accuracy as we learn to listen for the contextual details that divulge time clues during conversations. We glean subtle clues about when a person graduated from high school or what political events shaped a person’s life. 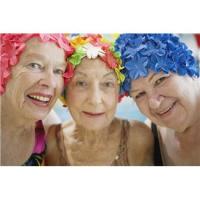 But lately I’ve noticed during follow-up conversations, that my first impressions are way off the mark. I’ll think, oh this person is old. Then I discover that we cut our teeth on the same rock and roll. Or someone whom I initially gathered to be about my age turns out to have graduated from high school 20 years after I did. What’s up with that?

It’s the old self-image playing tricks again. I do see the wrinkles in the mirror, but I don’t feel the wrinkles in my head or in my body. I feel like I should look the same as that young pipsqueak. Reality really bites when I come to a doorway at the same time as one of my elders. I pause for my elder to step through first; the pause stagnates as the “elder” pauses, waiting for me to pass through first. “Duh, I’m the elder!” The awkward recognition hits me like a ton of bricks every time.