National Trails Day, June 2, 2018, dawned bright and sunny. A group of 30 Idaho Trails Association, BLM, and REI volunteers gathered at 7:00 am to form two work parties that would tackle the Perjue Trail that follows the West Fork of Shoofly Creek in the Little Jack’s Creek Wilderness Area (LJCWA) of southwestern Idaho. LJCWA is a young Wilderness Area with few trails and very little press. That makes it a delightful area to explore because it would be a rare day to encounter another group of hikers.

Perjue trail is the longest trail in the Owyhee Canyon lands so far. Following an old stock and game trail, it was originally mapped and roughly cut in 2013. Each year since has presented challenges in hacking out a surprising jungle of vegetation that grows in the moist creek bed, in the hopes of establishing a true through hike.

This year the crew tried a two-pronged approach with one crew starting at the Shoofly Cutoff Rd and hiking over two mile into the densely brushed area. The other crew started from the Perjue trailhead on Mudflat Road just west of the Poison Creek Recreation site. (Dontcha love these names?)

Hiking across the high desert landscape, nothing prepares you for the sudden appearance of aspen trees, willows, wild roses, and tall sagebrush. Lupine, Indian Paintbrush, Red Columbine, and a plethora of plants I have no names for enliven the scenery. Mountain Goats, Great Basin Rattlesnakes, Pronghorn, deer, coyotes and mountain lions have been seen in this area. We, however, saw only a bull snake and one lone youngish coyote crossing the road.  We did see and hear many birds. The creek is said to host rare Redband Trout, as well. Ticks were our major wildlife group, and they must have held a brief celebratory rally at the scent of sweaty humans approaching.

The hike begins at this relic of a Ranch sign. I believe that is Bald Mountain in the distance.

The homestead stands before the West Fork drainage

Shortly after passing the abandoned homestead, perhaps built by Frank Perjue in the early 1900s, the trail curves eastward and begins to descend through red rock formations into the unexpected jungle. I was so busy trying to keep up with the crew and not fall on my nose that I only snapped a few photos. This is a great spring hike, even if you can’t make it all the way through the canyon. 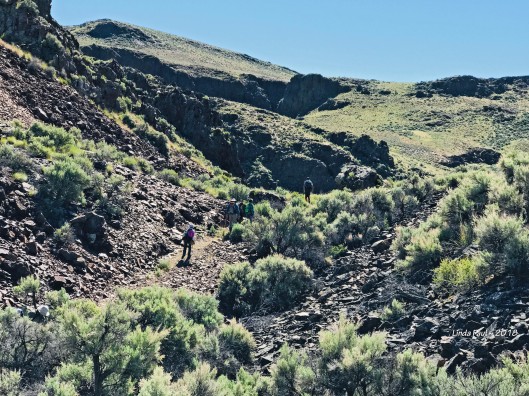 Headed for a surprise. The trail will curve to the left, taking us into the canyon between the grassy knoll in the background and the rocky slope at the top left of the photo. 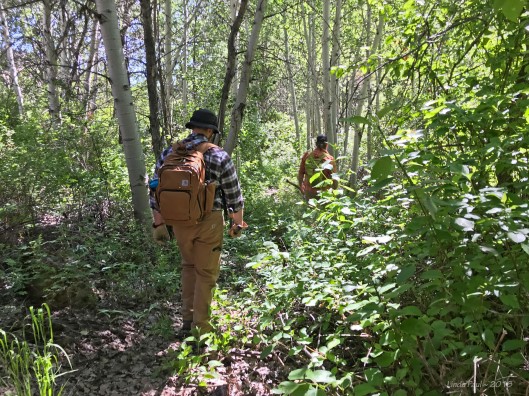 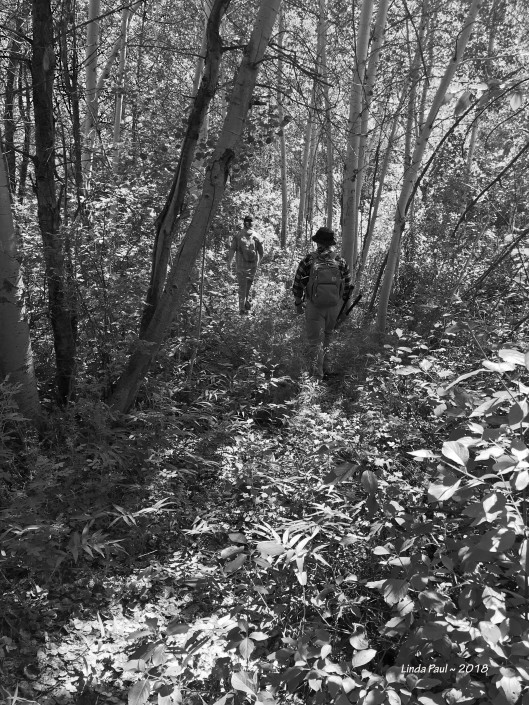 A pause for some fun on the long, mostly uphill slog out of the canyon.

A note of confusion: The 2012 Idaho Benchmark map lists this area as Purjue Canyon, as does the sign at the beginning of the trail. However, Frank Perjue, for whom it was named, spelled his name with an “e.” I have no idea which spelling is correct.